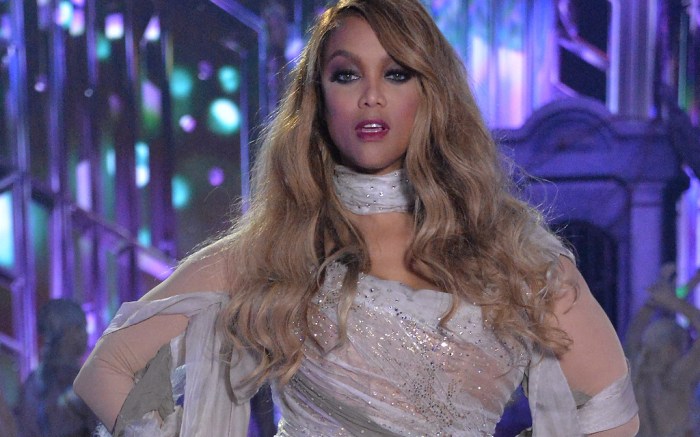 Tyra Banks showed that she can be spooky while still serving a fashion moment.

On this week’s episode of “Dancing with the Stars,” it was “Horror Night” and the contestants Monster Mashed their way to their utter victory or demise.

The model and host donned two Halloween looks to get viewers into the festive mood. The ensembles consisted of a mummy costume that featured Banks wrapped in shiny silver and brown pieces of fabric. For the second costume of the evening, Banks wore a brown gown that had a slightly ’80s-design that incorporated tears and blood splatters throughout the gown. The design also had long sleeves and ruching throughout.

Shoe-wise, Banks wore neutral heels that blended in with both of her themed looks.


Banks is known for her groundbreaking work as a model in the ’90s, walking for designers like Yves Saint Laurent, Thierry Mugler and Sonia Rykiel. Banks has also walked in 10 consecutive Victoria’s Secret Fashion Shows, and she was an Angel from 1997-2005.

Banks is also known for her uber-popular 2000s hit competition series “America’s Next Top Model.” In 2020 she became the host of “Dancing With the Stars.”

When it comes to Banks’ signature aesthetic, she wears a variety of silhouettes that live in the crux of being modern or vintage while also harping on the ideals of being refined or dramatic. Throughout her Instagram feed are pictures of her wearing edgy dresses, slouchy T-shirts, intricate swimsuits and fun tailoring.

Get spooky in neutral styles, inspired by Tyra Banks.

Click through the gallery to see more wild Halloween costumes over the years.