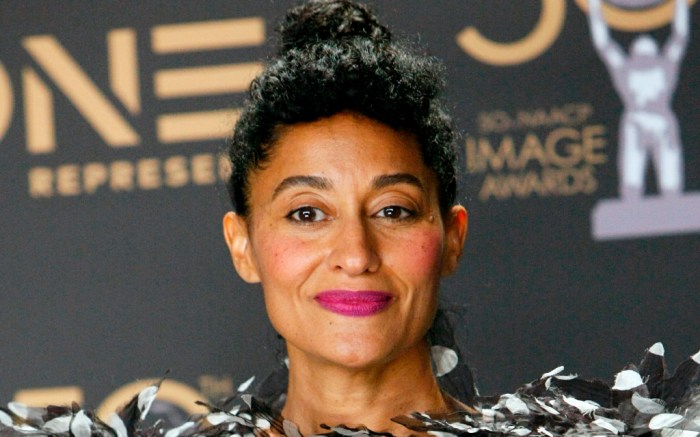 Tracee Ellis Ross did not disappoint at the 2021 NAACP Image Awards.

For Saturday’s ceremony, the actress, who is known to make a statement on the red carpet, showcased her look on Instagram via an at-home photo shoot.

The star took awards show-fashion to a whole new level, posing in a bold peplum suit from Schiaparelli. The unforgettable black ensemble featured a sleek jacket that was equipped with padded shoulders. The look was finished with a peplum detail and extra wide-leg pants.

Ross accessorized with a massive gold bird headpiece and styled her hair in glamorous updo. As for footwear, Ross took a trip the wild side, wearing sky high white platforms. The shoes featured a lug sole and a shiny gold rounded toe.

Being the fashion queen that she is, Ross debuted a second look later in the evening. She traded her Schiaparelli look in for an Alberta Ferretti flared jumpsuit. She complimented the sleek look with a classic wide-brim hat and jewels from Tiffany & Co. On her feet, Ross kept with the platform theme, wearing Giuseppe Zanotti’s Bebe pump. The shoes are of patent leather construction and are finalized with square-toe and block heel. The heels can be yours for $995 at GiuseppeZanotti.com.

The 2021 NAACP Image Awards aired on March 27 on BET and were hosted by Anthony Anderson.