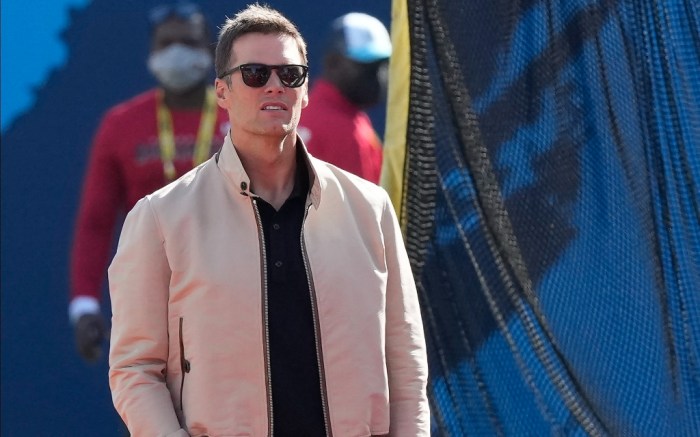 On Sunday, ahead of Super Bowl LV, the Tampa Bay Buccaneers quarterback walked the field in a classic look before suiting up in his football uniform. The star athlete, who is married to model Gisele Bündchen, looked debonair in Tom Ford’s San Herringbone Blouson jacket. The outerwear piece featured a zip-up closure and contrasting brown detailing at the sleeves and bottom.

Brady teamed the jacket with a navy knit polo shirt also from Tom Ford and beige twill denim pants from the brand. As for footwear, Brady kept it clean with a pair of beige sneakers. The shoes feature suede uppers and white laces.

When he’s not on the field, Brady has been known to make a fashion statement. His off-duty style includes crisp tailored suits as well as trendy sneakers and classic loafers. Brady has also had a number of endorsements through the years, including Ugg and Under Armour.

Brady and the Buccaneers are playing against the Kansas City Chiefs in Tampa, Fla. This will be the 10th time Brady has been to the Super Bowl — but his first as the team’s quarterback. Brady spent the first 20 seasons of his career with New England Patriots.

Tonight’s game was kicked off with a performance of “America the Beautiful” by H.E.R. and a moving rendition of the National Anthem by Eric Church and Jazmine Sullivan. Poet Amanda Gorman is set to recite a poem during the show, and The Weeknd will take the stage at the game’s halftime show.