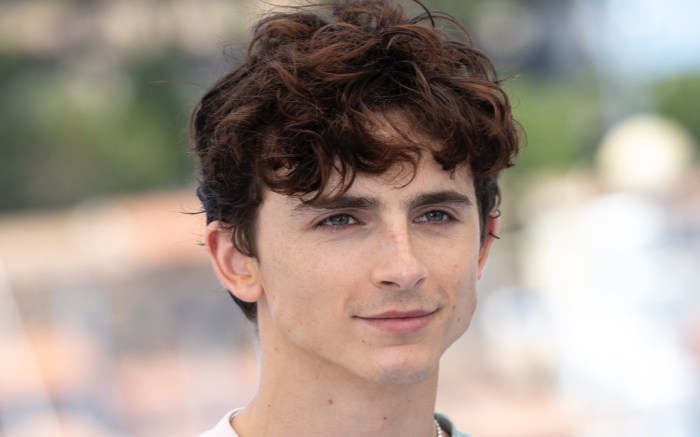 It’s safe to say that Timothée Chalamet is officially back on the red carpet circuit. For his second appearance at the 2021 Cannes Film Festival, the actor took a slightly more casual and edgy route at the latest photocall for Wes Anderson’s new film, “The French Dispatch.”

Chalamet slipped on a paint-splattered pink graphic T-shirt, paired with sharp black trousers. A frequent wearer of Cartier, the “Call Me By Your Name” star also accessorized with a white gold Juste un Clou bracelet and ring, as well as a diamond-encrusted Love bracelet and ring, by the high-end jeweler. Near the start of the photocall, he also wore a pair of angular black sunglasses — similar to past beloved pairs by Oliver Peoples.


On the footwear front, Chalamet wore a sharp pair of black leather Chelsea boots by Givenchy. The boots featured a stacked heel, tall elasticated side panels, and rounded toes. They were also detailed with the brand’s signature 4G logo in silver plaques on the heels, with soles embossed with the logo as well. Chalamet’s pair retails for $1,195 on Farfetch.com.


Chalamet is a fashion chameleon, often wearing looks that feature streamlined silhouettes and monochrome styling with bursts of prints, colors and textures. Plus, who could forget the quirky and trendy additions of pieces like a sparkling harness, Swarovski-embellished hoodie, or an Eiffel Tower keychain? The “Beautiful Boy” actor makes statements in bold looks from top labels like Stella McCartney, Alexander McQueen, Prada, and Haider Ackermann — to name just a few — as well as cult-favorite brands like Sterling Ruby. Chalamet’s bold style has made him a fixture on the fashion scene; fans are already speculating what he’ll wear as a co-chair of the 2021 Met Gala later this fall.


This isn’t the first sharp look the “Hot Summer Nights” star has worn in Cannes. For “The French Dispatch” premiere yesterday, Chalamet made headlines in a custom slim-fitting silver jacquard tuxedo by Tom Ford. That ensemble was paired with cream leather boots, as well as silver Cartier jewelry and a pair of Celine’s black acetate sunglasses.

When it comes to shoes, rocking a sleek boot on the red carpet is one of Chalamet’s signature styling moves. Glossy black leather Chelsea and zip-up pairs with sharp toes are his most frequent go-to’s, though he’s also known to don a chunky combat or lace-up style as well. These hail from similarly high-end brands as his wardrobe, like Berluti, Saint Laurent, Celine, and Ackermann. When off-duty (and on, as several event and red carpet photos prove) Chalamet regularly slips into versatile white and grey sneakers. New Balance is one of the star’s favorites — he’s even worn limited-edition styled by the brand’s collaborations with Staud and Jaden Smith. Outside of those, he’s also been spotted in pairs by Louis Vuitton, Vans, and Off-White — plus affordable Tretorn kicks that retail for under $40.

Slip on a pair of sleek black Chelsea boots this summer, inspired by Timothée Chalamet.

Click through the gallery for more of the best-dressed celebrities at the 2021 Cannes Film Festival.