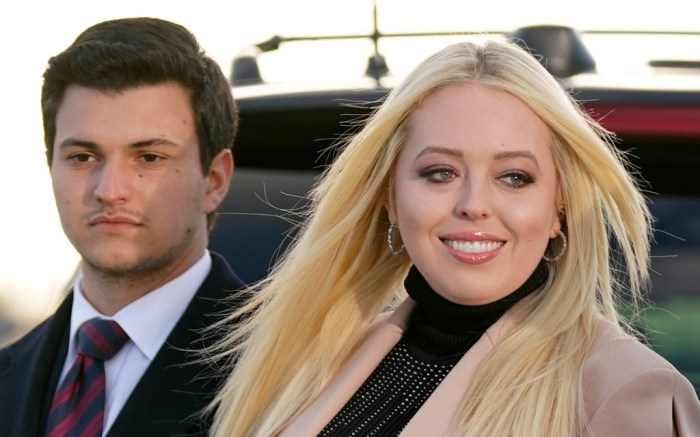 Tiffany Trump joined her new fiancé Michael Boulos as well as Donald Trump Jr. and his partner Kimberly Guilfoyle as they awaited the final departure of President Donald Trump and Melania Trump. The couple left the White House early this morning in their final move as acting president and first lady. Tiffany’s other siblings Eric and Ivanka Trump were also present for the event.

Before the first couple boarded Air Force One for President Trump’s Mar-a-Lago estate in Florida, his family stood on the jetway of Andrews Air Force Base, Md. Tiffany herself wore a black turtleneck dress layered under an open-sleeve tan jacket with bright pink lining for the occasion.

Though her shoes couldn’t be seen in images from the event, the first daughter tends to opt for twists on classic wares. In addition to leg-lengthening nude pumps, the University of Pennsylvania alum is also a fan of black or white pointed-toe stilettos, as well as sleek sneakers and ballet flats. Among her favorite labels is Aruna Seth, and she has several times opted for the designer’s butterfly-adorned silhouettes for public appearances.

Just yesterday, the 27-year-old lawyer announced on Instagram that her longtime boyfriend and business executive Michael Boulos officially popped the question. Sharing her first image with her now-fiancé, the engaged couple posed outside the White House in coordinating ensembles; Tiffany modeled a midi-length black puff-sleeve dress matched to embellished heels. The pumps appeared to measure over 4 inches in height.

“It has been an honor to celebrate many milestones, historic occasions and create memories with my family here at the White House, none more special than my engagement to my amazing fiancé Michael!,” wrote the first daughter in her caption. “Feeling blessed and excited for the next chapter!”