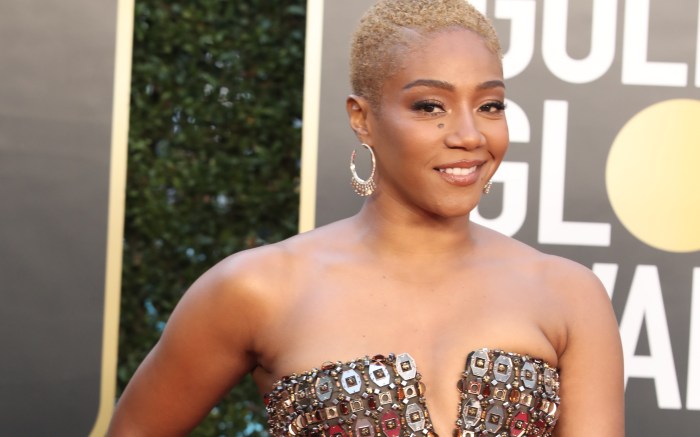 She ready! Tiffany Haddish delivered a memorable fashion moment at the Golden Globes 2021 on Sunday.

Turning heads in a dazzling metallic number from Alberta Ferretti, the “Girls Trip” star looked radiant in her crystal-adorned gown, which featured rows of ornate, mirrored gems to create a mesmerizing and alluring pattern. The gown’s strapless, low-cut neckline and sheer design gave the dress an element of edge.

Taking a sparkly cue from her sequined dress, the “Like A Boss” star accessorized with a pair of textured oversized gold hoops from Messika Paris, a matching, equally-glittery clutch and black heels.

Viewers got a better look at the designer dress when Haddish took the stage to present. She stunned as she read the nominees for Best Animated Film and didn’t miss a beat when it came time to announce Disney’s “Soul” the winner.

Haddish also gave fans a sneak peek of her glamorous gown on Instagram. In a series of Stories, she shared footage of herself making her way to the award ceremony, starting with a sultry video of herself all dolled up.

She then followed up with a close-up shot of her glam, asking her 6.4 million followers what they thought of celebrity makeup artist Ernesto Casillas’ work.