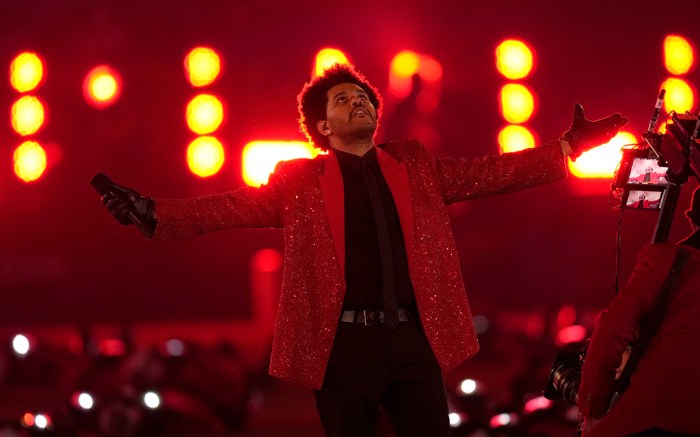 The Weeknd did not disappoint during the Super Bowl LV halftime show.

The stellar solo performance hyped up the Tampa, Fla., stadium as during the halftime mark of the Kansas City Chiefs and the Tampa Bay Buccaneers playoff game. For the Super Bowl 2021 performance, the singer wore a dazzling red blazer on top of an all-black outfit, complete with gloves. The Canadian-born musician topped off his halftime look with a pair of formal black and white oxford shoes. The blazer was notably similar to the red jacket worn in his “After Hours” short film, which was released last year.

The halftime show, which was sponsored by Pepsi, was full of its usual pyrotechnics and flashing lights. The singer performed a series of his most popular songs while a large crowd of dancers, wore bandages on their faces, bearing a similar motif to the musical artist’s “After Hours” character. The chorus, all in similar outfits to the star, moved throughout the performance to songs including “Starboy,” “The Hills,” “Can’t Feel My Face” and “Blinding Lights.”

The Weeknd opted for a classic yet flashy look for the Super Bowl LV half time performance, tapping a pair of black and white oxfords for his footwear. Oxfords are one of the most timeless silhouettes when it comes to men’s footwear. Often gravitating towards polished yet edgy looks, it comes to no surprise that the “Can’t Feel My Face” singer chose the shoe during the Super Bowl 2021 half time show.

Other performances during the Super Bowl LV included the National Anthem sung by R&B singer Jazmine Sullivan and country star Eric Church, the “America The Beautiful” sung by H.E.R. as well as a reading by poet Amanda Gorman, who all performed to a scaled-back crowd due to COVID-19 social distancing measures.