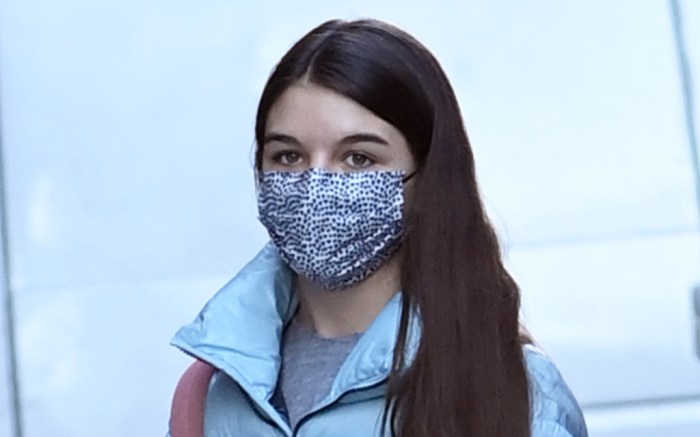 Suri Cruise is leading the way for Gen-Z style, taking after her mother, Katie Holmes, with ease.

The 14-year-old daughter of Holmes and Tom Cruise stepped out in New York this afternoon, heading home after grabbing a coffee in a snack with her school backpack in tow. The tween tapped into growing outerwear trends as she kept warm in a powder blue Colmar puffer jacket, gray tee and comfy black yoga pants.

Puffers quickly became the must-have outerwear thus far in the new year, seen on the likes of Kendall Jenner, Jennifer Lopez, Heidi Klum and more well-known stars in the past few weeks alone.


When it came down to footwear, Crusie opted against a snowboot and instead braved the leftover New York ice in floral sneakers. The rubber outsole pair came with decorated canvas uppers and a lace-up silhouette, bearing resemblance to classic designs from Converse. Similar styles retail for $40 on the brand’s website.


The teen style star previously wore the same icy blue jacket for an outing last month, this time matching the number to dark-wash jeans and classic Ugg boots. The celeb-favorited shoe silhouette has returned to the style scene amongst the revitalization of 2000s-era trends like slinky camisoles and low-rise jeans. A similar style from the brand retails for $170 at Nordstrom.com


Together under the guidance of Katie Holmes and Tom Cruise, Suri has already developed into a young fashion star. Her effortlessly cool taste includes everything from classic Ugg boots with ripped jeans to a boho-chic ensemble with a flowing red blouse, white camisole, yellow midi skirt and Adidas Gazelle kicks. She also previously sported a Holmes-inspired look with a white collared shirt with puff sleeves and light-washed mom jeans, another staple of her mom’s closet as well. Her choice of footwear echoed her shirt, walking in all-white Adidas Superstar sneakers,

Click through the gallery to find more of Suri Cruise’s best looks over the years.