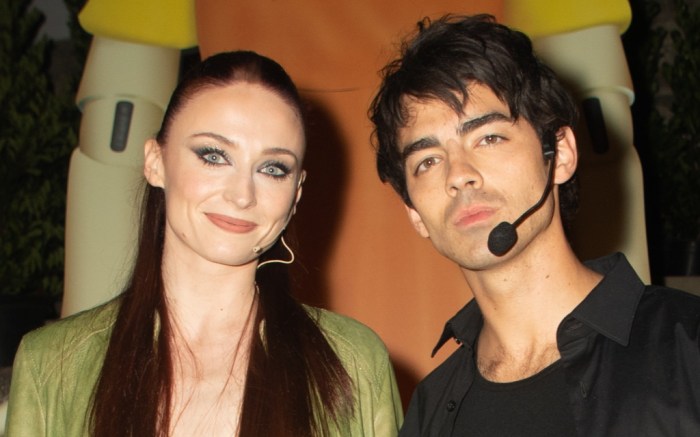 The “Game of Thrones” actress paid homage to “The Lizzie McGuire Movie,” dressed as the title character’s lookalike, Italian pop star Isabella Parigi. As part of her costume for the “Squid Game”-themed event, Turner donned a green silk dress layered with a flowing tulle skirt — similar to Isabella’s sleek outfit in the 2004 film. Her ensemble was complete with a green jacket, microphone and black fishnet tights. Joe Jonas, her husband, dressed in all-black with a shaggy hairstyle, similarly to the film’s villain, Paolo Valisari.

For footwear, the “Dark Phoenix” actress wore a pair of patent black boots. The knee-high style included squared toes, as well as block heels that appeared to total at least 3 inches in height. Turner’s boots completed her replica of Isabella’s outfit, while giving the ensemble a sleek rock n’ roll edge.

Additionally, Turner posed with Jonas and actress Olivia De Jonge—who dressed up as Lizzie McGuire—on Instagram. “Sing to me Paolo,” Turner captioned the image, referencing Isabella’s iconic line prior to singing the movie’s finale song, “What Dreams Are Made Of.” The photo, which has received over 1.1 million likes, even received a reply from McGuire herself—AKA Hilary Duff. “I’M SCREAMING,” Duff wrote in the comments section with crying emojis.

Black boots are a fall staple that have re-emerged as a go-to shoe this season. The pair’s versatility with numerous ensembles, as well as their full coverage, have earned their popularity in shoe rotations this time of year. In addition to Turner, stars like Kourtney Kardashian, Olivia Rodrigo and Rita Ora have been seen in black boots from Prada, Dr. Martens and Vera Wang in recent weeks.

Slip on black boots this fall, inspired by Sophie Turner.

Click through the gallery to discover Turner and Joe Jonas’ best couples style over the years.