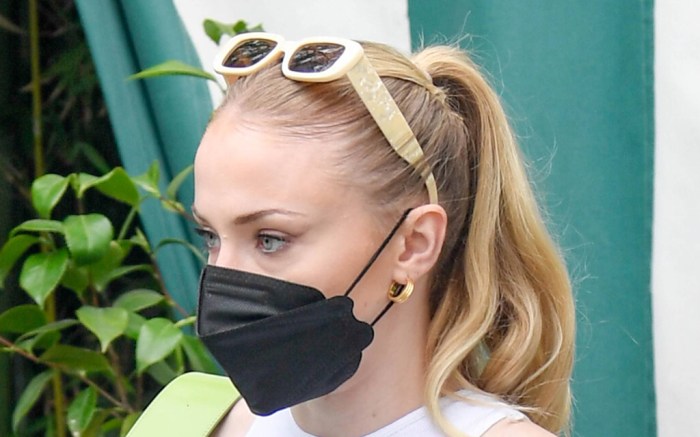 Sophia Turner’s deep pockets were on display on Wednesday outside San Vicente Bungalows in West Hollywood.

The “Game of Thrones” alum was spotted alongside her husband Joe Jonas, but it was her bottom that garnered attention. She was wearing a white tank, an $80 version by Orseund Iris, and “Wader” jeans by Kiev-based label KSENIASCHNAIDER. This controversial pair, with massive pockets for maximum storage capabilities, isn’t the first of its kind: Paris-based labels Y/Project and Vetements ignited the wacky denim trend a few years back and it continues to gain traction with new silhouettes in 2021.

The lime-hued leather handbag that’s slung over her shoulder is from the Insta-approved label By Far.  This brand’s purses are so popular that they even captured the hearts of supermodels like Kendall Jenner, Bella Hadid and Irina Shayk, who was just spotted on Monday in New York City with the same “Manu” style.

Another lime-hued statement is the 25-year-old A-lister’s kitten heels, which elevates the tomboy ensemble.

Turner and Jonas both opted for denim in the daytime, but the celebrity style power couple doesn’t always match. Earlier this week, the married duo left Nobu Malibu and the British starlet demonstrated for us two of the season’s hottest trends: silky pajama dressing in a mind-bending print and square-toed block heels. Her hubby, on the other hand, took a toned down approach in all-black-everything.

If you’re envious of Sophie Turner’s green sandals, you can snag your own perfect pair of grassy-hued heels below.

Click through the gallery to find more of Sophie Turner’s street style over the years.