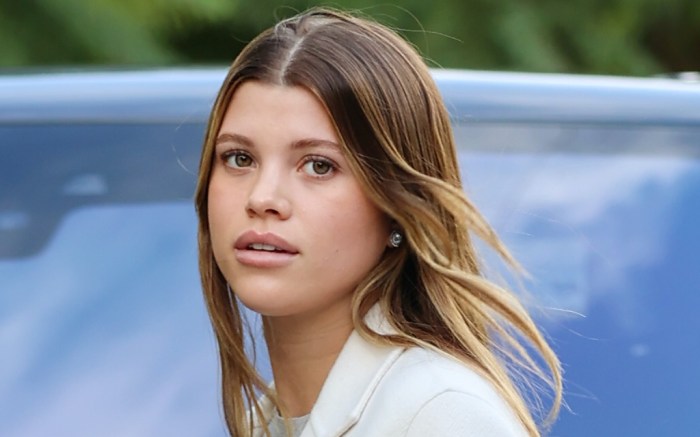 Sofia Richie was fully neutral for the holidays, while bringing cheer with an affordably festive accessory.

The model was spotted strolling in Los Angeles, wearing an oversized cream coat. The ’90s-esque number was layered over a gray sweater and wide-leg blue jeans, which featured Western-style embroidery. Richie’s look was complete with pearl stud earrings. Her outfit gained a glamorous holiday twist with Betsey Johnson’s $98 Glitteratzzi handbag, which featured a white top-handle silhouette topped with a large crystal-covered bow.

For shoes, the model grounded her outfit with a pair of lug-sole boots by Proenza Schouler. The $825 style featured white leather uppers, as well as black side Chelsea-style panels lined with black stitches. The pair was complete with thick ridged black soles. The style gave her look a utilitarian edge, while remaining on-trend with the ’90s minimalism that’s grown in popularity this year.


Lug-sole boots have been a top footwear trend this year, due to their thickness and comfort that brings most looks a combat-ready appearance. In addition to Richie, Kourtney Kardashian, Hailey Baldwin and Kate Hudson have also worn lug-sole pairs by Prada, Bottega Veneta and Stuart Weitzman in recent weeks.

On the footwear front, Richie typically wears a range of styles and brands. The star can be seen in strappy sandals and pointed-toe pumps on the red carpet from Andrea Wazen, Tom Ford and Giuseppe Zanotti. She’s also been spotted wearing Celine loafers, as well as Chanel, Nike, APL and Adidas sneakers while off-duty. The model is a fashion world mainstay, having dropped capsule collections with Frankie’s Bikinis, PrettyLittleThing and Misguided. Earlier this past spring, she even co-designed a collection for House of Harlow 1960 with big sis Nicole Richie, and just launched her own collaborative line with Bar III at Macy’s.

Elevate your winter shoe game with lug-sole boots like Richie’s.

Click through the gallery for more of Sofia Richie’s glam looks over the years.