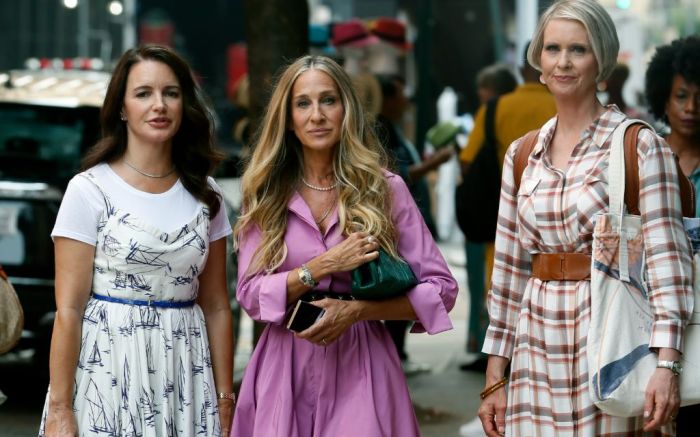 Since Sarah Jessica Parker first posted a teaser video announcing the filming of “And Just Like That,” HBO Max’s reboot of “Sex and the City,” there has been a constant chatter about how the epilogue series would approach fashion (often referred to as the unofficial fifth character of the show). Would Carrie still wear her beloved Manolos — or would the real-life SJP Collection infiltrate the show? What would the styling look like without longtime costume designer Patricia Field? How would the absence of Kim Cattrall as Samantha Jones change the big fashion moments? And how would the new characters (played by actresses Nicole Ari Parker, Sara Ramirez, Sarita Choudhury, Karen Pittman and more) show their personal style?

With filming well underway, we now have a running compendium of looks, dresses, accessories — and of course, shoes — to parse out, each one a puzzle piece that will come together to tell the whole fashion story of the show when it airs some time later this year (release date is still to be determined).

Below, a list and breakdown of all the looks, updated with each behind-the-scenes snapshot as it’s released. This story will be updated regularly as more fashion moments generate buzz.

In mid-August, Parker posted a series of behind-the-scenes photos on her Instagram account, including one of herself with actresses Cynthia Nixon and Kristin Davis, alongside Nicole Ari Parker. The actress was one of a handful added to the cast and other additions include Sarita Choudhury, Karen Pittman and Sara Ramirez.

The foursome photo showed Nixon in a dye-patterned dress, Davis in a floral sheath by Lela Rose Bridal, Parker in a yet-to-be-fully-revealed look, and Ari Parker in an off-the-shoulder striped dress by Rosie Assoulin.

The return of the bird headpiece

In a scene with Chris Noth aka Mr. Big, Parker is seen in a voluminous white taffeta skirt with gigantic black polka dots on it. The Carolina Herrera skirt was worn with a boatneck bodysuit and a pair of steel gray satin pumps accented with an elaborate crystal detail on the toe, by Italian shoemaker Duchessa Gardini (plus a hand-painted Rebecca Moses bag). But it was a pink-and-black feather headpiece that caused a ruffle for its similarity to the bird-themed headpiece that Parker’s character wore in the infamous wedding scene during the first “Sex and the City” movie that drew ire and speculation. Would the bird cause another blowout fight between Carrie and Mr. Big?

A contentious dress with no tag

In early August, set photos of Parker in a certain maxi dress caused a commotion across social media when the dress in question was suspected to be from Forever 21. Would Carrie Bradshaw actually wear a $7 dress — and would Parker actually condone the fast fashion on set?

“Sex and the City” fashion chronicler @everyoufitonsatc took a deeper dive on the garment, revealing that the dress closely resembled one not from Forever 21 but instead from Anthropologie, made by Indian-American label Raga. They were later informed that the dress was “purchased without a label,” making the origin of it an unsolvable mystery.

The show’s costume designer Molly Rogers paired the dress with a menswear-style blue button-down shirt, a delicate pearl necklace, a handbag from the new Gucci x Balenciaga collaboration and a pair of glittery, multicolor platform sandals by Terry de Havilland. Parker joined Nixon in another scene wearing the same look, with Nixon in a blue shirt and maxi skirt with ballet flats by Jessica Simpson on foot.

The blue rose — and the blue Manolos — make a comeback

While some had guessed that Parker might infuse a bit of the SJP Collection footwear into Carrie Bradshaw’s shoe closet, the re-appearance of the character’s something-blue Manolo Blahnik Hangisi pumps has somewhat put that thought to bed. In a late July filming, Parker was on set in a cream blazer, emerald green cropped gaucho trousers (and matching satin handbag), plus the blue satin bejeweled pumps that Mr. Big used for his second proposal in place of an engagement ring, in the first film. The outfit also featured the gigantic blue faux rose lapel pin that Carrie wore in season 3 of the original show.

As for the rest of the cast seen on set that day, Davis was spotted in a floral-themed Lela Rose Bridal sheath dress, with her character’s daughters both donning floral dresses from Oscar de la Renta’s fall ’21 collection. Meanwhile, Nixon was seen in a two-piece Gerard Darel patterned look and a leather tote bag by Paco Rabanne. And an appearance from actor Willie Garson in a cornflower-blue suit and yellow suede driving shoes proved that Stanford Blatch’s style is as statement-making as it ever was in the original series (or in the character’s film sequel wedding spectacular, for that matter).

While the fashion has been a bit here-and-there in terms of designer choices, buzzy pieces, archival finds and high-low styling, one thing is clear:  The shoes are high. Aside from a ballet flat on Miranda or a Converse All-Star there on Charlotte’s daughter, the footwear choices have consistently been high-heeled, with Carrie clearly favoring platform high-heels. On July 15, Parker was seen in a brightly patterned dress, topped with an enormous menswear white button-up Ralph Lauren Polo shirt, with a pair of bronze platform heels on foot (and a WNYC canvas tote bag in hand)>

Did Charlotte start dressing Carrie? Early in July filming, Parker stepped out wearing a pale pink collarless coat atop a white pinstriped pleated A-line dress, paired with white laser-cut leather mules. Aside from the black canvas tote bag (a Parker accessory — not the character’s), the outfit looked more Charlotte than Carrie, and another on-set shot showed Davis in a pink boucle tweed sheath dress with brown leather belt, patent-leather nude pumps and a Louis Vuitton top-handle bag — a pink twinning moment if there ever was one.

There will be hats — and tote bags

On July 13, an indoor scene revealed a Carrie outfit that included a black satin botanical cropped jacket by Dries Van Noten, paired with a vintage Claude Montana silk beige jumpsuit — and a straw chapeau adorned with red and white feathers. It would prove to be just one of a few hat moments in the filming. Behind-the-scenes shots showed Parker in the outfit carrying her own WNYC black canvas tote bag. Nixon’s in-character striped dress, also by Dries Van Noten, paired with her own canvas tote (which read ” Bernie Sanders, Justice For All”) proves that the the actresses’ own off-camera accessories are statements unto themselves. And while Davis stays in character carrying a Louis Vuitton leather tote (paired with an Alexander McQueen skirt), her Nike slides further show on-camera looks mingling with off-duty style.

An early series of shots of the Carrie-Charlotte-Miranda trio show actresses Parker, Davis and Nixon in a series of dresses, all paired with heels — and belts. Carrie’s fuchsia Carolina Herrera dress was finished with black leather studded belt that the character wore in the “Sex and the City” movie (and black leather stiletto pumps and a Tk bag), while Charlotte’s TK slip dress was worn overtop a white tee, with a delicate blue belt and tk bag. Meanwhile Nixon’s plaid tk dress had a thick brown belt, plus a pair of espadrilles and an oversized tote bag.

The first behind-the-scenes images during show filming revealed that the series’ signature high heels were officially back. Parker was spotted in a gingham skirt by Norma Kamali, with a hat by Monrowe worn on her back, plus towering patent-leather platform Mary Janes by Celine on foot. Nixon, meanwhile, sported a pair of wide-leg white trousers by Vince, and a promo photo of the trio posted by Davis revealed her character in a Carolina Herrera look with a Christian Dior bag.

Ahead of the July shoot date, in June Parker posted a photo of herself with fellow actresses Cynthia Nixon and Kristin Davis, all in jeans and tees to do a table read of the script.

The Manolo Blahniks that Pete ate

In May, ahead of the official filming commencement, Parker posted a photo of a chewed-up strappy sandal, which SATC loyals quickly identified as the Manolo Blahnik brown-and-teal high heel that Aiden’s dog Pete was found to be chewing inside Carrie’s closet. “Unearthed,” wrote Parker in her caption.

In January, Parker released a short trailer on her Instagram account, in it a collage of typical NYC scenes — a subway train coming into a station, the hustle and bustle of the streets on a winter’s evening, various panoramas of the skyline and the city’s bridges. In Carrie’s signature white page on a computer screen, the words “And just like that” typed out. The teaser prompted a deluge of speculation on the upcoming, but there were zero hints of the fashion moments to come.

See more outfits from the “Sex and the City” reboot “And Just Like That.”