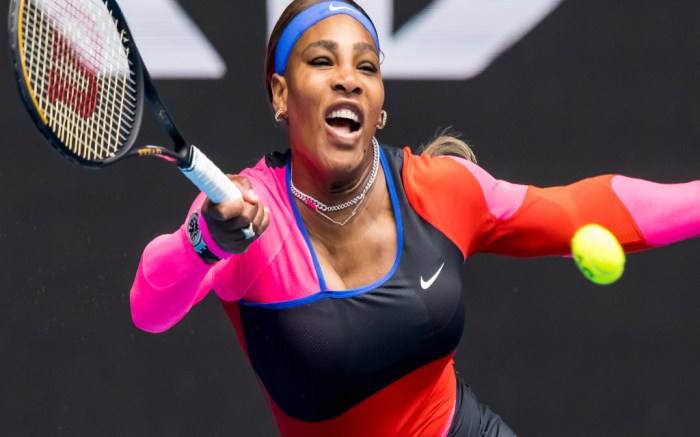 Serena Williams brought her bold style to the Australian Open.

On Monday, Williams won her first match against Germany’s Laura Siegemund, wearing a black, pink and red long sleeve catsuit from Nike. The unitard featured a surprise as it included one full-length leg and one bike-short length leg.

While Williams is known to make a statement with her attire on the court, today’s look paid tribute to her childhood hero. When asked about the outfit, Williams explained to reporters, according to The Sydney Morning Herald and The Guardian, that the one-leg catsuit was inspired by late track and field star Florence “FloJo” Griffith Joyner. Joyner famously wore a pink and white one-leg catsuit during the Olympic Trials in 1988.

Williams revealed that the idea to honor Joyner was brought to her by Nike. “I was like, oh my God, this is so brilliant,” Williams said, The Herald reported. “That’s where we started. Obviously we made some changes and tweaks to it… It became this.”

Williams added: “I was inspired by Flo-Jo, who was a wonderful track athlete, amazing athlete, when I was growing up,” The Guardian reported.

Williams completed her Australian Open look with a blue headband, pink wristbands and silver chain necklaces. As for footwear, Williams opted for white and gold sneakers also from Nike.

Today’s catsuit comes nearly three years after Williams made a stylish return to the French Open following the birth of her daughter Alexis Olympia in a full-length black catsuit. The memorable unitard featured a bold crimson waistband. She finalized the statement with a pair of sparkly gray and black Nike sneakers.

You can take the superhero out of her costume, but you can never take away her superpowers. #justdoit pic.twitter.com/dDB6D9nzaD

While the black catsuit was met by praise, the French Tennis Federation slammed the look as unacceptable with president Bernard Giudicelli banning the catsuit. Williams explained in a press conference that she wore the look due to issues with blood clots. Amid the backlash, the Women’s Tennis Association and Nike stood by Williams’ decision to wear the one-piece.

“You can take the superhero out of her costume, but you can never take away her superpowers. #justdoit,” Nike tweeted alongside an image of Williams in the outfit at the time.