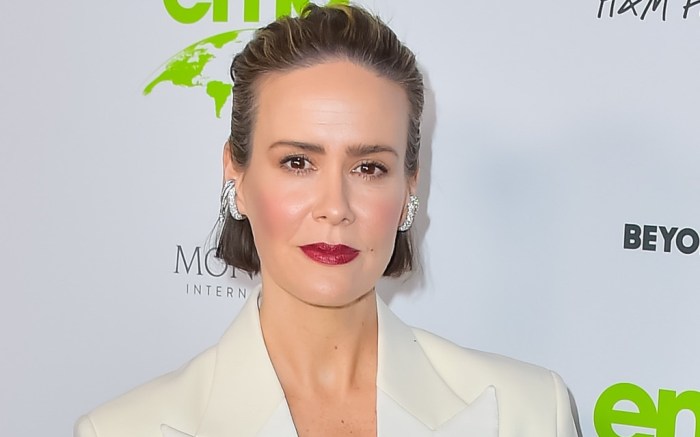 While arriving at Gearbox, the “American Horror Story” actress donned a sharp suit by Magda Butrym. The set included a cream blazer in an oversized fit, which featured sharp white lapels, as well as a pair of pleated wide-leg trousers. Paulson cuffed her sleeves to show their silky lining and dynamically wore the set over a black bra for a faux “topless” look. Her look was complete with a black silky clutch and layered diamond Ana Khouri earrings.


For footwear, Paulson kept her shoes classic and chic with a pair of pointed-toe pumps. Her footwear featured triangular pointed toes in a silky black fabric, as well as slightly flared heels. When worn with her suit, the pumps elevated the set and kept the look neutral and streamlined.


Pointed-toe pumps have become one of this year’s most popular styles, now that live events and a desire for glamorous dressing have returned. The shoe gives most looks a sharper appearance, thanks to its thin heels and triangular toes. In addition to Paulson, stars including Zendaya, Tyra Banks and Sarah Jessica Parker have also worn pointed pumps from Christian Louboutin, Manolo Blahnik and Dolce & Gabbana in recent weeks.

When it comes to shoes, the “Run” star often wears crystal-accented sandals and pumps from brands such as Prada, Calvin Klein and Christian Louboutin on the red carpet. Off-duty, her looks frequently include suede ankle boots and lace-up oxfords. Paulson’s also dipped her toes into modeling, having previously starred in campaigns for Prada and Saks Fifth Avenue.

Click through the gallery for more celebrity power suiting moments over the years.