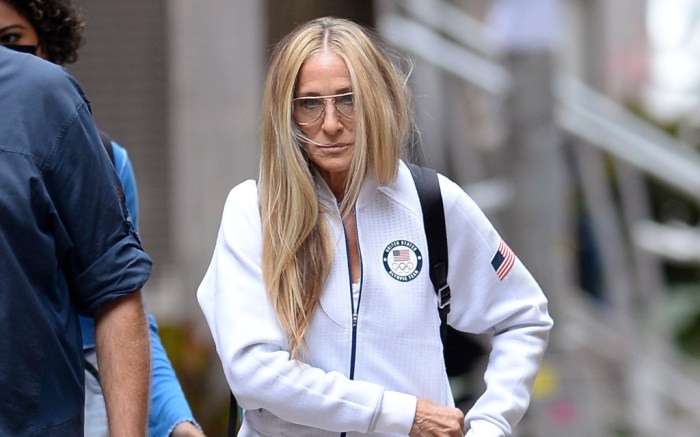 The “Sex And the City” alum is currently filming for her new show, HBO Max’s “And Just Like That…” in New York. On Wednesday, she was seen on set supporting her country’s Olympic team. Parker wore a white Team USA jacket with beige pants and a beige top under the jacket. She had a backpack over he shoulders as well as clear aviator glasses on.

The “Family Stone” actress chose to wear shoes from her own line. The white patent Tartt Pierce Mary Jane style shoe features a nearly-2-inch block heel. The vintage-inspired heel features laser-cut detailing as well as a strap across the upper and a rounded toe. The shoes added a dressier touch to her casual outfit.

Much like Parker, other major stars like John Legend and Taylor Swift have recently shown their support for Team USA competing at the 2020 Tokyo Games. Legend performed virtually at the opening ceremonies and Swift did a voiceover for a promo for Simone Biles’ Olympic return.

Though she may not rock Olympic attire too often, Parker certainly does rock a good shoe quite frequently. In fact, Parker and her character from “Sex And the City” are icons when it comes to footwear. The actress has been often seen in both T-strap and pointed-toe pumps for years, sometimes from her own SJP by Sarah Jessica Parker brand and from labels like Manolo Blahnik, Christian Louboutin and Rene Caovilla. She’s also been spotted in a range of contemporary flats, boots and sandals from brands like Isabel Marant and Repetto.

Add a white Mary Janes style to your closet to channel SJP.

See Sarah Jessica Parker’s most beautiful shoes over the years.