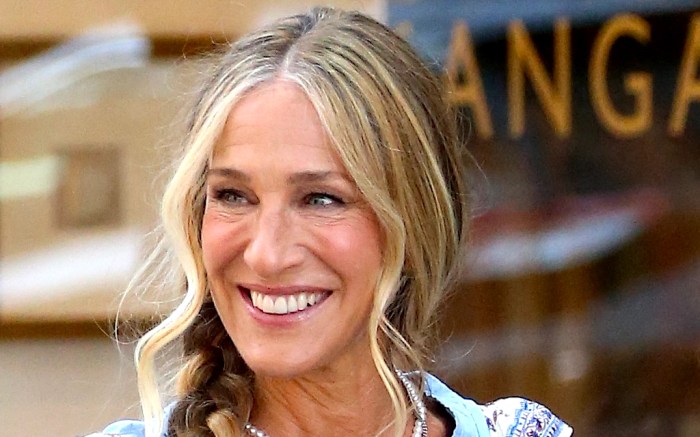 Sarah Jessica Parker just made glitter a daytime staple — along with one of the year’s most viral handbags.

While in-character as Carrie Bradshaw for HBO Max’s “Sex and the City” reboot, “And Just Like That…,” Parker wore a tiered cream maxi dress over a blue button-up blouse. Her dress also featured a button-up silhouette, as well as flounced straps and a red and blue floral print.

In signature Bradshaw fashion, Parker’s accessories remained slightly eclectic: she paired the ensemble with a layered silver chain necklace and straps of pearls, as well as a pearl ring, silver ring and silver ID bracelet.


For footwear, the actress wore a pair of multicolored platform sandals. The shoes were covered in multicolored glittering stripes that included blue, red, purple, and gold, providing a maximalist base for the outfit; their tall block heels and thick platforms added further support and comfort, as well.

Those qualities have made the style one of the season’s most popular, especially as events and nightlife reopen and people return to wearing high-heeled shoes again. Parker is no stranger to the shoe for “And Just Like That…,” having worn a metallic bronze pair by Saint Laurent for the show. Neither is her co-star Cynthia Nixon, who’s donned pairs by Gianvito Rossi and Saint Laurent as Miranda Hobbs.

One of the boldest parts of Parker’s ensemble, aside from her shoes, was her handbag. The actress wore Gucci’s take on Balenciaga’s Hourglass bag from its’ viral Aria runway show earlier this spring, which featured a co-branded “hacking” with the Parisian house.

The bag featured the Hourglass’ signature structured silhouette and top handle, along with gold hardware and a “B”-shaped clasp. Notably, however, it was covered in Gucci’s monogrammed beige canvas, merging the two houses’ staple logos into one piece. The collection is anticipated to launch later this fall.


“And Just Like That…” has made New York City a verifiable runway in recent weeks, due to the stylish cast and the focus on their costumes designed by Molly Rogers. Parker’s been spotted in numerous flowing dresses and statement-making Bradshaw outfits, which often feature the character’s most treasured pieces.

In addition to her iconic purple sequined Fendi Baguette bag, Parker’s also worn the studded Streets Ahead belt and blue satin Manolo Blahnik Hangisi pumps — which she made famous from 2008’s “Sex and the City” movie. Plot-wise, much of the details for the show are under wraps — though Parker was seen filming with Bridget Moynahan, who played Bradshaw’s beau Mr. Big’s ex-wife, Natasha, in the original series.

When it comes to shoes, Parker is a chameleon with a colorful and sparkly collection — with some notable favorites. The actress adored both T-strap and pointed-toe pumps for years, both from her own SJP by Sarah Jessica Parker brand and labels like Blahnik, Rene Caovilla, and Christian Louboutin.

She’s also been spotted in a range of contemporary boots, flats, and sandals from brands like Isabel Marant, Repetto, and Swedish Hasbeens, and is known to don Koolaburra’s wedge sneakers for an added height boost. These are often paired with printed tops and skinny jeans, as well as glamorous ensembles by top fashion brands like Prabal Gurung, Temperley London, Balmain, Alexander McQueen, and more.

Slip on a pair of sparkly platform sandals this summer, inspired by Sarah Jessica Parker.

Click through the gallery for more of Sarah Jessica Parker’s prettiest shoe moments over the years.