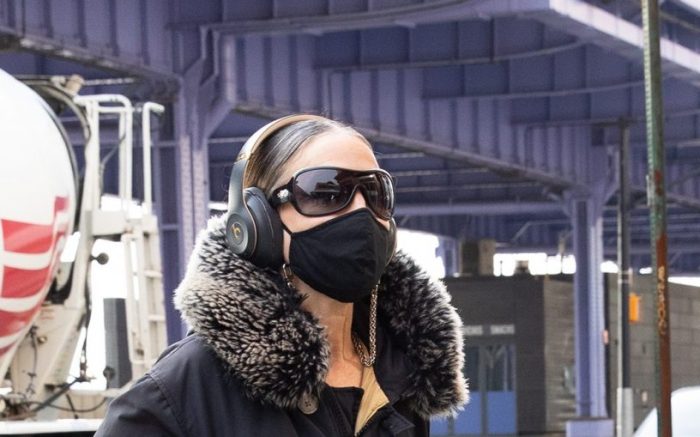 On Wednesday, Parker paid a visit to her SJP by Sarah Jessica Parker shoe store in New York City, bundled up in a black puffer coat that featured a fur collar. The actress paired the outerwear piece with a pair of light wash denim that were complete with a wide cuff.

Parker accessorized with rounded sunglasses, a black face mask and her go-to silver face mask chain strap from Pretty Connected. She also sported Beats headphones that perfectly matched her ensemble. As for footwear, Parker opted for a pair of black boots from her namesake brand.

Called the Busker, the suede scrunch boots are adorned with silver studs and sit atop a block heel. The knee-high shoes retail for $795 at SJPbySarahJessicaParker.com.

Parker’s decision to pair the boots with cuffed jeans can be an intimidating style choice as the combo isn’t always flattering. However, Parker’s look works due to the simplicity of the jeans and hue of the shoes. Additionally, Parker showcased a styling hack by further pushing down the shoe, allowing for the bottom of her denim to hit right at the top of the boots. This gives the look a sleek feel.

It looks like fans will be getting even more fashion moments from Parker after the actress revealed on Sunday that “Sex and the City” is officially returning.

A reboot of the series is heading to HBO Max and will star Parker (Carrie Bradshaw), Cynthia Nixon (Miranda Hobbs) and Kristin Davis (Charlotte York). The women each announced the happy news on Instagram alongside a trailer.

“I couldn’t help but wonder… where are they now? X, SJ @HBOMax @JustLikeThatMax #AndJustLikeThat #SATCNextChapter,” Parker captioned an Instagram post, confirming the news.

In the teaser, video of New York City is shown before the clip transitions to a computer screen that reads “And just like that…” and “The Story continues…” with Parker narrating.

Kim Cattrall, who played Samantha Jones, will not be returning, Variety and Deadline reported on Sunday. The series will include 10 half-hour episodes and will begin production in New York City this spring, according to the outlets. Additional casting information has not yet been released.

Shop similar black scrunch boots as Sarah Jessica Parker with these picks below.

Click through the gallery to see Sarah Jessica Parker’s most beautiful shoes over the years.