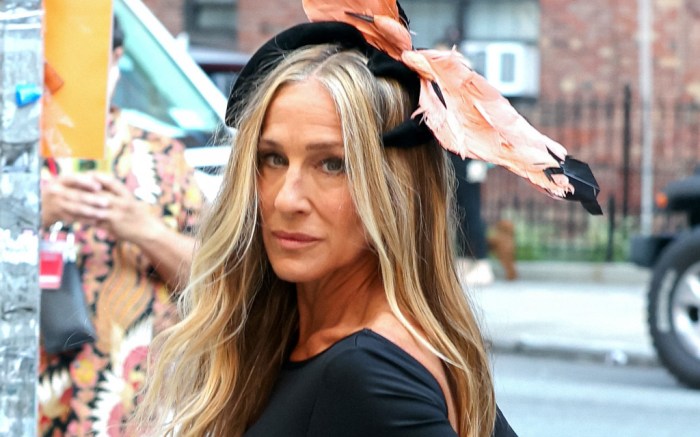 While in-character as Bradshaw for HBO Max’s “Sex and the City” reboot, “And Just Like That…,” Parker wore a black hat featuring a black and pink-feathered bird. The bird’s extended wings added greater drama to her dress, which featured a black backless top and cream silk skirt, which was covered in black polka dots and cinched with a matching silk bow. Fans will recognize Parker’s avian-inspired headpiece as a reference to Bradshaw’s own blue bird-accented veil, worn at her wedding in 2008’s “Sex and the City” movie. The look was accessorized with a vintage bag, featuring a face painting by Rebecca Moses.

On the footwear front, the actress wore a pair of navy silk pumps. The custom pair, made by Italian shoemaker Duchessa Gardini, featured sharp pointed toes and heels that were at least three inches tall. Bradshaw’s signature glamour was shown through a diamond-shaped crystal accent atop both toes, as well as crystal studs on the heels and heel counters.


Pointed-toe pumps have made a major resurgence this summer, thanks to the return go wearing high-heeled shoes to live events and nightlife. Parker’s no stranger to the style, having worn numerous pairs of them over the years. In fact, she’s even donned two pairs by Manolo Blahnik — one black leather, one Bradshaw’s signature blue Hangisi’s — while in-character for “And Just Like That…”

“And Just Like That…” has made New York City a verifiable runway in recent weeks, due to the stylish cast and the focus on their costumes designed by Molly Rogers. Parker’s been spotted in numerous flowing dresses and statement-making Bradshaw outfits, which often feature the character’s most treasured pieces. Aside from today’s feathered hat, Parker’s also been seen in her character’s purple sequined Fendi Baguette bag and studded Streets Ahead belt from past “Sex and the City” projects.

When it comes to shoes, Parker is a chameleon with a colorful and sparkly collection — with some notable favorites. The actress adored both T-strap and pointed-toe pumps for years, both from her own SJP by Sarah Jessica Parker line and labels like Blahnik, Rene Caovilla, and Christian Louboutin. She’s also been seen in a range of contemporary boots, flats, and sandals from brands like Isabel Marant, Repetto, and Swedish Hasbeens, and is known to don Koolaburra’s wedge sneakers for an added height boost. These are often paired with printed tops and skinny jeans, as well as glamorous ensembles by top fashion brands like Prabal Gurung, Temperley London, Balmain, Alexander McQueen, and more.

Slip on a pair of sleek blue pumps, inspired by Sarah Jessica Parker.

Click through the gallery for more of Sarah Jessica Parker’s prettiest shoe moments over the years.