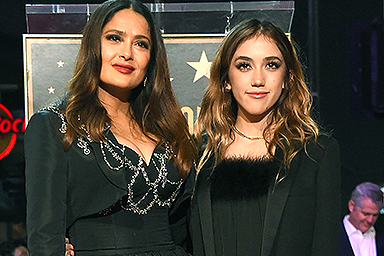 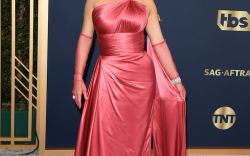 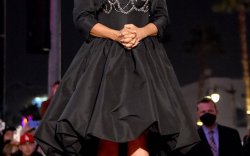 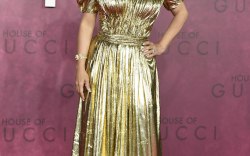 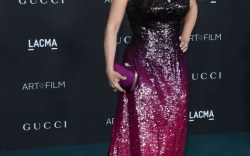 Joined by her family, Salma Hayek celebrated the unveiling of her star on the Hollywood Walk of Fame.

The actress and mother was joined by her daughter, Valentina Paloma Pinault, and her husband, Francois-Henri Pinault, for the joyous occasion. Hayek was also gifted a plaque by Los Angeles Mayor Eric Garcetti following the unveiling of the star. Stars given to actresses and actors come as no small feat, the accolade showcasing their talent and acting prowess.

Dressed stylishly in a custom mid-length Alexander McQueen black dress, the actress posed for a photo with her coveted star. The garment was long-sleeved and voluminous, rounding at the hem of the skirt, giving the silhouette dimension. The sleeves of the dress stopped at the elbows, giving the actress a modest amount of coverage. The ensemble was classic and fit the actress well. The dress was truly the perfect garment to express Hayek’s femininity, elegance and class, emphasized by the round and voluminous skirt and choice of a formal black. The seemingly plain look was tied together with a statement piece of silver jewelry, almost resembling a suit of armor or chainmail around the actress’s neck and bust.

Her daughter dressed similarly in black with a more youthful silhouette. Valentina Paloma Pinault wore a black slip dress, decorated with faux black fur, giving the hem and the bust texture. She wore a simple blazer overtop, streamlining the look.

The star-studded actress and her 14-year-old daughter both wore black footwear, with Hayek opting for a simple 5-inch black pump that elongated her legs, simultaneously complementing the length and volume of her gown. In contrast to her mother, Pinault chose to wear leather boots that reached her knees. The seemingly leather material and length are perfect for colder weather and give any outfit an extra bit of youth and sass.