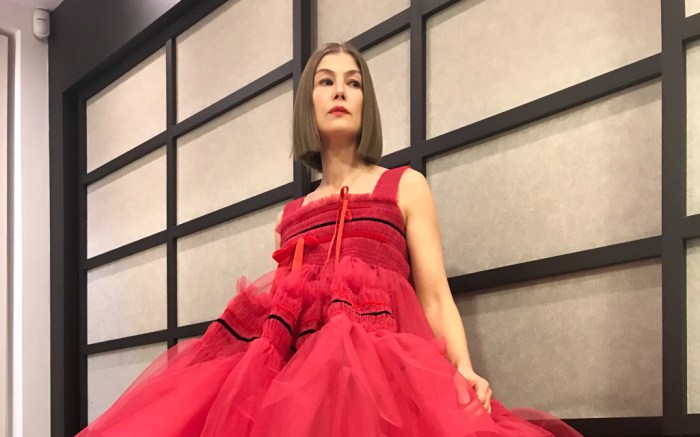 For the ceremony, Rosamund opted for a bold red tulle dress from Molly Goddard. The ballerina-inspired ensemble featured a wide tutu and thick straps. The frock was also adorned with velvet ribbons.

As for footwear, Pike gave the look an edge. Instead of sporting heels, the actress opted for chunky black combat boots. The footwear featured a lace-up closure and a rugged platform outsole. Pike continued the daring theme with a red lip and styled her blunt bob bone straight.

Tonight, Pike is up for Best Actress in a Musical or Comedy Motion Picture for her role as con artist Marla Grayson in Netflix’s “I Care A Lot.” Ahead of the ceremony, Pike celebrated herself and Netflix’s other nominees at Netflix’s Nominees Toast virtual event. For the occasion, Pike wore the same combat boots teamed with a puff sleeve blouse and a floor-length leather skirt. The high-waisted skirt featured slight pleats at the bottom.

“The @Netflix Nominees Toast! Well that was cool. All the nominees of all this year’s awards ceremonies so far gathered together on one Zoom. As Ted As Ted Sarandos said, what these films and television shows have given us this year is “a sense of connection at the time we need it most”. I second that. The response to #ICareALot has been collective almost in a way I would have imagined it had we been in cinemas. Quite an extraordinary effect. Thank you all of you who have watched the film and thank you @Netflix #NetflixNomineesToast,” Pike wrote on Instagram.

The Golden Globes are airing live on NBC. Tina Fey is hosting from The Rainbow Room in New York City while Amy Poehler is co-hosting from the Beverly Hilton in Los Angeles.

Click through the gallery to see more looks from the 2021 Golden Globes.