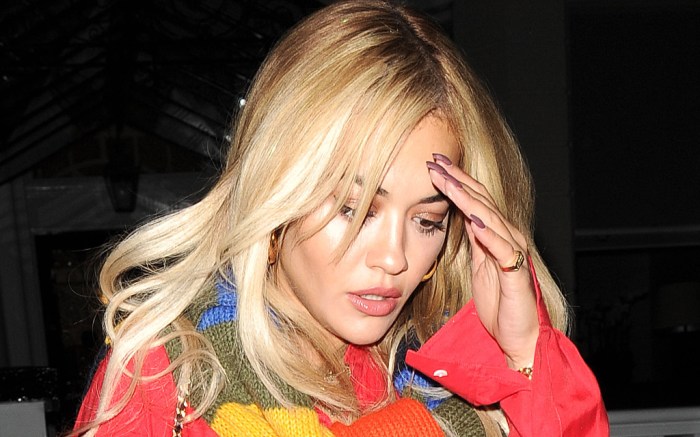 Rita Ora’s latest look unlocked a memory of a major style trend from the late 1990s and early 2000s.

The “Phoenix” musician modeled new pieces from Italian brand Disclaimer on Instagram on Thursday, cozying up in a graphic, airbrushed sweater and sweatpants from the label. The design came coated in graffiti-style decorations that were a huge hit throughout the early stages of the millennium — and are even still present today. Major names like Destiny’s Child, Hilary Duff, Kanye West and Kate Moss sported the trend that fell in line with the decade’s growing appreciation for grungy-chic style.

Ora’s take on the retro design, in particular, features a $90 sweatshirt and $95 sweatpants, both available at DisclaimerOfficial.com.

Sweats and loungewear has become the new normal when it comes to celebrity style. Amidst the current health crisis, the world of fashion is turning towards clothing that provides a sense of comfort and stability with ease of wear; that includes everything from biker shorts and hoodies to soft pants like Ora’s pick. In regards to footwear, there has been an increased appreciation for sneakers and 1990s-style silhouettes — think thong sandals and chunky platforms — as celebrities and fans alike look for familiarity in their shoes.

As for Rita Ora Herself, the “For You” singer also has appeared in campaigns for DKNY Fragrances, Roberto Cavalli and Rimmel London, and she serves as an ambassador for Escada and Thomas Sabo. Most recently, she was one of the few stars to attend Fendi’s in-person spring ’21 show during Milan Fashion Week.

And Ora’s experience with the footwear industry goes beyond chic street style. She has been a longtime Adidas partner and collaborated with Giuseppe Zanotti in January 2019 for an exclusive collection of shoes. This year, she also announced a partnership with German footwear retailer Deichmann. And if that wasn’t enough, just last week, Ora joined forces with ShoeDazzle for a series of fall footwear styles that all retail for under $100. Coming with everything from thigh-high boots to trending utilitarian styles, the pairs can be found at ShoeDazzle.com with wallet-friendly price tags.

Click through the gallery to find more of Rita Ora’s boldest style moments throughout her career.