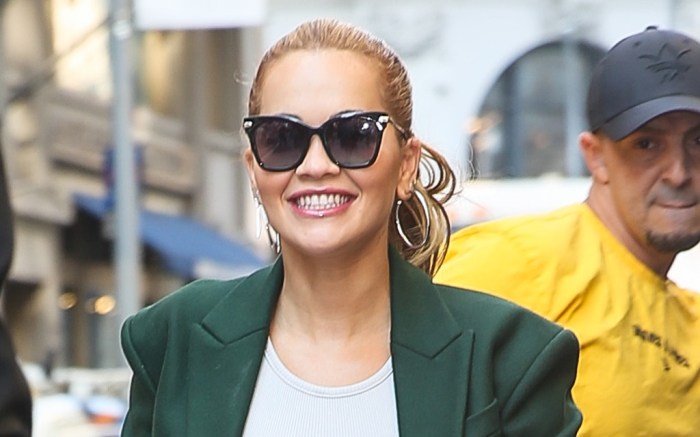 Rita Ora gave her own sporty twist on a wardrobe classic in New York City.

The “Phoenix” musician was spotted wearing a dark green overcoat. The classic piece featured sharp lapels and wide shoulders, as well as dark brown buttons. However, Ora put a sleek spin on it by pairing the coat with color blocked track pants by DSquared. The sporty trousers, which featured a drawstring closure and a color palette of red, white and orange, added a distinctly relaxed nature to the coat. Ora heightened the look with a sheer ribbed top, as well as multiple silver rings and a bold red handbag.

When it came to shoes, the “Anywhere” singer donned a pair of towering ankle booties. The shoes featured heels that appeared to total at least 4 inches in height, as well as black leather uppers. Their open-toe silhouettes were tied together with white technical laces, wrapping around Ora’s ankles for added support. The mix of classic and athletic aesthetics further elevated her ensemble’s eclectic nature.


Boots have recently emerged as a sleek alternative to pumps, ideal for between-season dressing. Ora’s most recently worn a towering pair of Vera Wang ankle boots this summer, as well. However, she isn’t the only star gravitating towards boots; Anne Hathaway, Irina Shayk, and Sofia Richie have all donned pairs this season, as well.

When it comes to shoes, Ora’s styles are varied. The “Let You Love Me” singer often opts for matching sets and monochrome looks from top brands with a variety of aesthetics, like Fendi, Chanel and Dion Lee. Her shoe style follows a similar formula, frequently including on-trend styles. Most recently, she’s been seen in ankle-wrap sandals, slip-on mules, and thong sandals from brands like Versace, Kat Maconie, and Miu Miu, among others. The musician has also appeared numerous times at the Met Gala, wearing dramatic gowns from Vera Wang, Prada, Marc Jacobs and more luxury designers.

Ora’s a mainstay in the fashion industry, having fronted campaigns for brands like Donna Karan, Roberto Cavalli, and Escada. The musician has previously collaborated on fashion collections with Adidas Originals, Escada and Tezenis, as well as a shoe capsule line with Giuseppe Zanotti. She’s also been a longtime partner of ShoeDazzle, creating several collections for the budget-friendly brand. Her latest spring collection featured styles like puffed leather-strap mules, chunky slides, and open-toed boots, all retailing for under $100 on ShoeDazzle.com.

Add a pair of bold black boots to your next outfit, inspired by Rita Ora.

Click through the gallery for more of Rita Ora’s most memorable street style looks over the years.