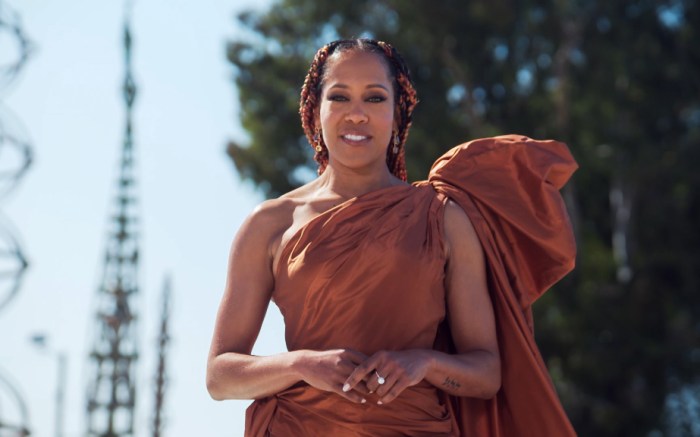 For the ceremony, which took place on Saturday, March 27, at the Pasadena Civic Auditorium in California, King posed from home against a white backdrop, wearing a custom rust taffeta gown from the fashion label.

The dramatic look featured a one-shoulder design, an asymmetrical skirt and a dazzling statement train. The train was equipped with a larger-than-life bow that cascaded down to the star’s feet.

To compliment the dress, King opted for red, orange and gold box braids and opted for a smokey eye and nude lipstick. As for footwear, King continued the shiny theme with a pair of heels from Stuart Weitzman. Called the Nudist sandals, the shoes were bronze in hue and featured a strap across the toe and ankle. The footwear was finalized with a sleek stiletto heel.

Last night, King was nominated in two categories: Entertainer of the Year and Outstanding Directing in a Motion Picture for “One Night in Miami.”

King’s bronze moment comes after she made a glittering appearance at the 2021 Critics’ Choice Awards earlier this month. King unveiled her look on Instagram, sharing a photo of herself posing in a sparkle-coated gown from Versace. The look also featured a structured shoulder design and a wrapped finish. On her feet, King also went with footwear from Stuart Weitzman. Like at the NAACP Image Awards, King sported the brand’s Nudistsong silhouette. King’s choice in particular also included a platform base — you can shop similar designs like the Nudist Disco silhouette with its 5-inch height for $425 at StuartWeitzman.com.