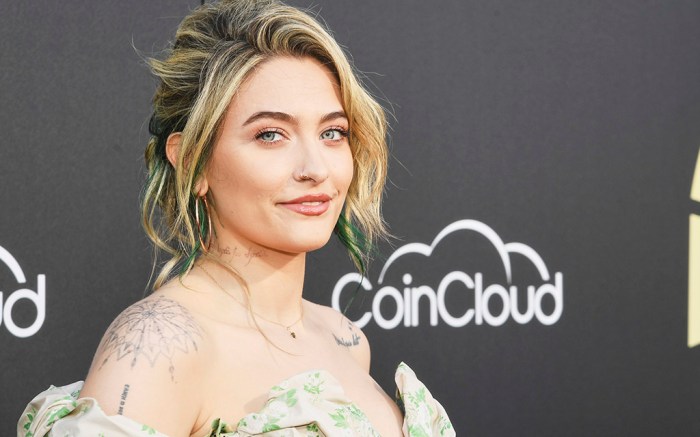 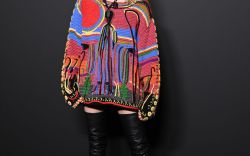 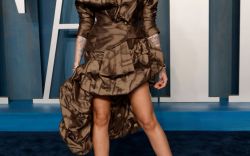 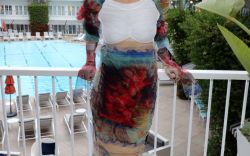 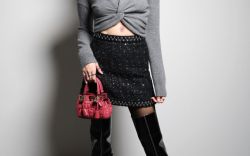 Jackson donned a green and white Vivienne Westwood dress for the occasion. The off-the-shoulder dress featured mixed floral prints and a midi skirt, as well as a gathered and draped bustier top. She accessorized with several of her bohemian signatures: stacked bangles and friendship bracelets, numerous gold rings and contrasting earrings (one large gold hoop, one delicate diamond drop).

For footwear, Jackson slipped on a set of towering white platform sandals by Saint Laurent. The open-toe Bianca style, a signature of the French brand, featured 5.3-inch block heels, thick platform soles and knotted leather toe straps. Jackson’s pair also featured a set of wraparound ankle ties, knotted in bows at the heel. Though her shoes appear to have sold out, a similar pair retails for $895 on Farfetch.com.


Ankle-wrap ties have become a popular footwear trend this season, due to their added support and punchy style that wraps around the ankles and calves. Stars like Kristin Cavallari, Kim Kardashian, Lizzo and more have been spotted in the style in recent months. Jackson’s pair for the CTAOP event added a groovy ’70s twist to the trend with a block heel and knotted toe straps, which have also been popular in recent styles by Gucci and Bottega Veneta.

The “Star” actress is known for her bohemian-chic style, which often features intricate beading, fringe and flowy silhouettes. She often wears boots, pumps and strappy sandals detailed with embossed prints or metallic tones on the red carpet, usually from top brands like Balmain, Christian Louboutin and Giuseppe Zanotti. While off-duty, the model and musician prefers comfy sandals and sneakers by Birkenstock, Converse, and Golden Goose — as well as her go-to cozy Ugg boots.

Jackson’s role in the fashion world extends beyond wearing designer threads on the red carpet. The star has previously modeled in ads for Calvin Klein, AGL and Re/Done x G.H. Bass & Co. Last January, she also made her runway debut in Jean Paul Gaultier’s final show at Paris Fashion Week. Throughout Fashion Month, Jackson is often seen in the front rows of major labels like Stella McCartney, Christian Dior, Moschino and Givenchy.

Get your ’70s groove on in a pair of platform sandals, inspired by Paris Jackson.

Click through the gallery for more of Paris Jackson’s bold street style over the years.