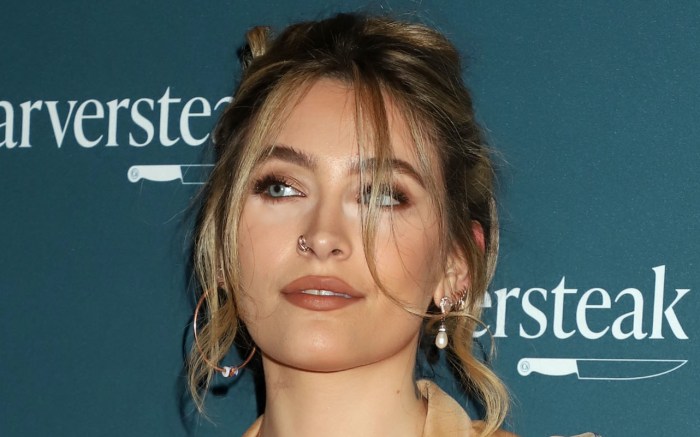 The “American Horror Stories” actress posed in a collared nude minidress. The silky number featured a bustier top, which extended into a sheer draped asymmetric skirt with a black dragon print. The daughter of Michael Jackson layered the piece with a flowing kimono, which featured a matching nude hue and dragon print. Her outfit was complete with a pendant necklace, mismatched earrings, rings and a Bulgari handbag.

When it came to shoes, the “Scream” actress opted for platform boots. Her brown suede style featured thick platform soles, as well as ankle-length uppers. The pair also gave her a towering height boost from block heels totaling at least 3 inches in height.

Platform heels have become a top shoe style this season from their height and support boosts. Pairs with block heels and thick soles are some of the most popular, though stiletto-heeled pairs are a top pick as well. In addition to Jackson, stars like Hilary Duff, Chrissy Teigen and Hailee Steinfeld have also worn platform shoes by Giuseppe Zanotti, Jimmy Choo and Prada in recent weeks.

Jackson can often be seen in towering sandals and boots on the red carpet from top brands like Saint Laurent, Giuseppe Zanotti and Neil J. Rodgers. The “Habit” actress is also known for wearing statement sneakers on formal occasions by Gucci and Zadig & Voltaire. Her off-duty footwear also includes Golden Goose and Converse sneakers. The star has previously modeled in ads for Calvin Klein, AGL and Re/Done x G.H. Bass & Co. Last January, she also made her runway debut in Jean Paul Gaultier’s final show at Paris Fashion Week.

Click through the gallery for more of Jackson’s bold street style over the years.