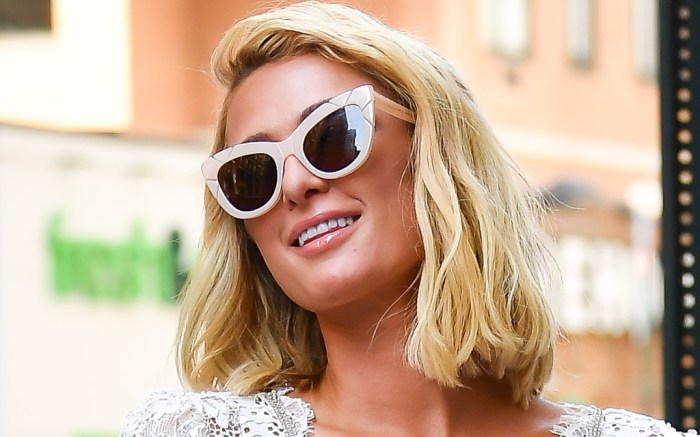 The socialite joined sister Nicky Hilton for a stroll yesterday in the city, following the Tribeca Film Festival premiere of her documentary “This is Paris.” Hilton opted to beat the heat in a romantic white floral lace midi dress, featuring a tiered skirt and puffed sleeves. The heiress accessorized the feminine frock with a sleek pair of acetate-framed cat-eye sunglasses, a sparkling bow bangle and a perforated white pouch. The duo made a complementary pair in their opposing monochrome outfits (Nicky wore all-black), both grounded by pointed-toe pumps.

On the shoe front, Hilton gave her romantic dress an edge with a pair of Valentino’s Rockstud pumps. The white pointed-toe style features sleek ankle and sling back straps, as well as 4.3-inch heels and shiny gold stud embellishments. The heels retail for $990 on Farfetch.com.

The Valentino Rockstud pump has become a popular shoe for the Italian brand, under the direction of Pierpaolo Piccioli. Hilton herself has worn the style in numerous colors over the years, recently donning an all-black pair for a West Hollywood, Calif., date night with fiancé Carter Reum last month.

She notably posed for a 2020 ad campaign with Nicky and mom Kathy Hilton to celebrate the Rockstud’s 10-year anniversary, donating her shoot fee to the Union Rescue Mission. Other celebrities like Olivia Culpo and Blake Lively have taken note, wearing heels and boots with the gold square studs to various events this year. New styles from the brand have also featured larger versions of the studs, called the Roman Stud, across a range of pumps, sandals and flats.


Hilton’s look was a texture-mixing take on monochromatic dressing, one of the year’s most popular styling hacks. A similar streamlined outfit can be achieved by pairing clothing, shoes and accessories in the same color or print. Single-tone ensembles have been all the rage this season, worn by stars like Tracee Ellis Ross, Hailey Baldwin and Megan Thee Stallion.

The “Confessions of an Heiress” author is no stranger to the monochrome trend — in fact, she brought it to the mainstream with her matching Juicy Couture tracksuits and caps in the early 2000s. Since then, Hilton’s incorporated the styling trick into a range of looks, from travel outfits to dressier ensembles for dinners out.

The Paris Hilton Skincare founder’s shoe wardrobe is expansive. The singer and businesswoman has worn a range of pumps and sneakers by Christian Louboutin, Jimmy Choo, Brian Atwood and Giuseppe Zanotti over the years, frequently accented with crystals or mixed materials — both staples in her maximalist wardrobe. She even starred in Yeezy’s Season 6 campaign in 2018, wearing the brand’s chunky sneakers and nude sandals as a Kim Kardashian lookalike. Among her vast ventures, she also has a namesake shoe collection.

Slip into summer whites with a pair of pointed-toe pumps, inspired by Paris Hilton.