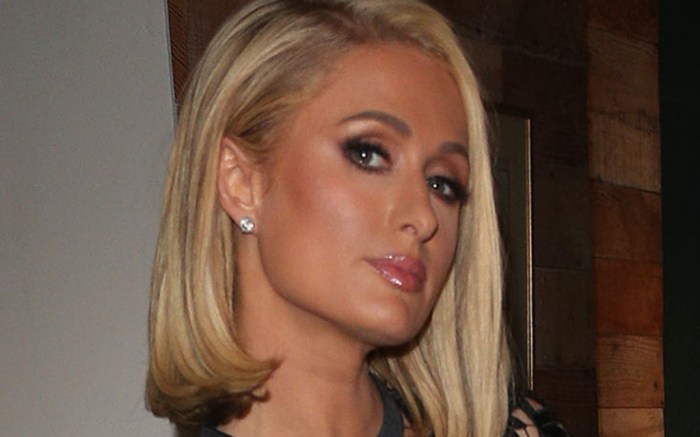 Paris Hilton sparkled at the launch event for her new Netflix cooking show, “Cooking With Paris.”

To celebrate the debut of the new program, Hilton threw a splashy party — complete with her namesake “Paris Pasta” and “Sliving Sauce.” For the occasion, she wore a shimmering blue lurex gown by PatBO. The piece featured a flowing skirt and long sleeves, as well as structured shoulders and a deep neckline. However, the boldest element of the dress was its front cutouts around the ribcage, which kept Hilton cool during the summer heat. She paired the look with classic diamond stud earrings.

As seen in post-event Instagram posts from Hilton’s friends, like actress Kat Graham, the heiress paired her look with a set of sky blue pumps. The pair featured heels totaling at least 4 inches in height, as well as sharp pointed toes. Their hue complemented Hilton’s gown perfectly, creating a monochrome blue moment that was elegant and chic.

Hilton’s event was a star-studded affair, with guests like Graham, Demi Lovato, Miranda Cosgrove, Hayden Panetierre, Paula Abdul and Nikita Dragun in attendance. Of course, the entrepreneur’s entire family was present, including her sister, Nicky, and mom, Kathy — who starred with Hilton on FN’s trio of fashionable August covers.

The businesswoman is no stranger to a pointed-toe pump — in fact, she’s worn numerous pairs over the years, often from top brands like Christian Louboutin, Brian Atwood and Philipp Plein.

The “Stars Are Blind” singer’s shoe wardrobe is expansive. The musician has worn a range of pumps and sneakers by Christian Louboutin, Jimmy Choo and Giuseppe Zanotti over the years, frequently accented with crystals or mixed materials — both staples in her maximalist wardrobe. She even starred in Yeezy’s Season 6 campaign in 2018, wearing the brand’s chunky sneakers and nude sandals as a Kim Kardashian lookalike. Among her vast ventures, she also has a namesake shoe collection.

Outside of footwear, Hilton is a major force in the fashion industry. As a model, she’s previously walked in runway shows and starred in campaigns for brands like Iceberg, The Blonds and Christian Cowan. Hilton has also expanded her skill set as a businesswoman, launching her own lines of handbags, clothing, jewelry, fragrances and skincare over the last two decades.

Step into a pair of sharp blue pumps, inspired by Paris Hilton.

Click through the gallery for more of Hilton’s glamorous style evolution, from 1997 to now.