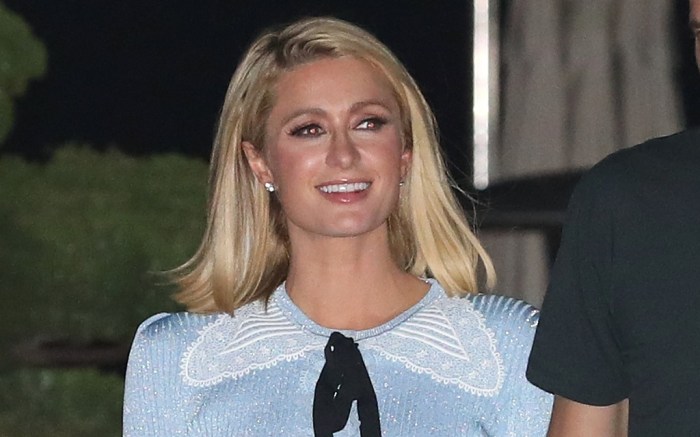 Paris Hilton amped up the glamour for her latest date night look in a sparkling dress and studded pumps.

The socialite was spotted walking hand-in-hand with fiancée Carter Reum yesterday, after a date at Nobu Malibu. Hilton wore a pale blue minidress for the occasion, which featured a flounced skirt, ribbed texture, and long sleeves. The dress’ boldest elements were a large lace collar and black bow detailing, which added a whimsical air to her ensemble. Hilton accessorized with a black patent satchel bag, which featured a similarly large bow, as well as classic diamond stud earrings and her dazzling engagement ring.


For footwear, Hilton slipped on her favorite black leather Valentino Rockstud pumps. The pointed-toe style, which she’s previously worn in a range of colors, features sleek ankle and sling back straps, as well as 4.3-inch heels and shiny gold stud embellishments. Hilton’s pair retails for $1,070 on Farfetch.com.

The Rockstud pump has become a popular shoe for Valentino under the direction of Pierpaolo Piccioli. Hilton previously wore her black pair for a date night with Reum earlier this season, as well as the same style in white leather while visiting New York City last month with her sister Nicky Hilton.

The “Confessions of an Heiress” author notably posed for a 2020 ad campaign with Nicky and mom Kathy Hilton to celebrate the Rockstud’s 10-year anniversary, donating her shoot fee to the Union Rescue Mission. Other celebrities like Olivia Culpo and Blake Lively have taken note, wearing heels and boots with the gold square studs to various events this year. New styles from the brand have also featured larger versions of the studs, called the Roman Stud, across a range of pumps, sandals and flats.


The “Stars Are Blind” singer’s shoe wardrobe is expansive. The musician has worn a range of pumps and sneakers by Christian Louboutin, Jimmy Choo, Brian Atwood and Giuseppe Zanotti over the years, frequently accented with crystals or mixed materials — both staples in her maximalist wardrobe. She even starred in Yeezy’s Season 6 campaign in 2018, wearing the brand’s chunky sneakers and nude sandals as a Kim Kardashian lookalike. Among her vast ventures, she also has a namesake shoe collection.

Outside of footwear, Hilton is a major force in the fashion industry. As a model, she’s previously walked in runway shows and starred in campaigns for brands like Iceberg, Philipp Plein, The Blonds, and Christian Cowan. Hilton has additionally expanded her skill set as a businesswoman, launching her own lines of handbags, clothing, jewelry, fragrances, and skincare over the years.

Add some edge to your next outfit with a pair of sleek black pumps, inspired by Paris Hilton.

Check out the gallery for Paris Hilton’s glamorous style evolution over the years.