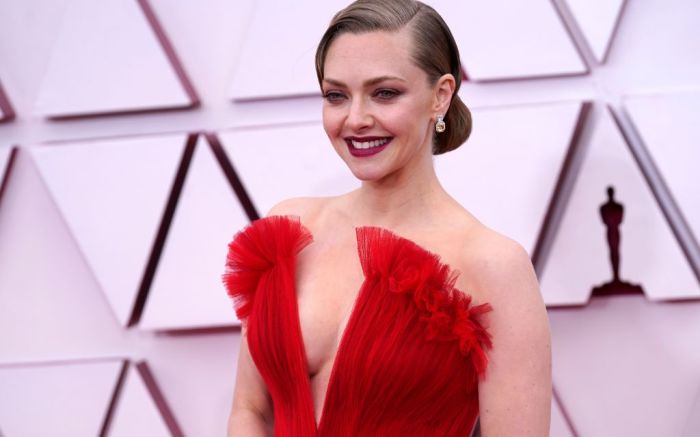 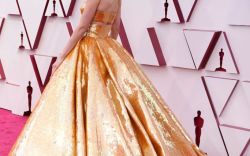 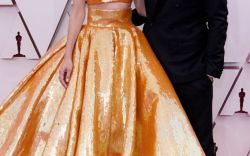 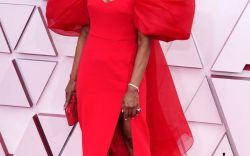 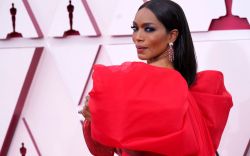 In Hollywood — as in real life — the past year has been filled with casual dress codes. Even when the 2021 awards show season kicked off in January with a renewed resolve to find creative workarounds to Zoom-heavy formats, the Golden Globes were filled with casual moments, some good (Jodie Foster and wife in Prada pajamas) and some less appetizing (Jason Sudeikis in a tie-dye hoodie that many viewers were probably also wearing at home).

But at Sunday night’s Academy Awards, glamour was finally, fully back in action — and it was glorious, like a long drink of water after a yearlong fashion drought.

The challenges of the past year may have put fashion in a new perspective (and into less of a priority lane). But they have also proven the power of self expression tied to fashion, during a time of such raw emotion. Perhaps that’s why the full-on display of glamour at Sunday’s show felt so impactful — and hopeful. In a moment of undulating optimism, the razzle-dazzle of the Oscars could provide a sneak-peek into a fantastical future filled of beauty, even if that future is not entirely real or still further away than we’d like it to be.

As it turns out, the evening that ensued gave just cause for celebration. With a win from Chloe Zhao for “Nomadland,” the director became the first woman of color to nab the Best Director award and only the second woman overall. (It must be said that she accepted the Oscar in a pair of sneakers and monastic knitwear dress, doing things her way.) Overall, the evening seemed to take a symbolic step towards inclusivity, especially within its Black community. “Two Distant Strangers,” a live-action short about a white police officer killing a Black man, won in its category and stars such as Regina King, Angela Bassett and Tyler Perry spoke about racial justice during the show. Elsewhere, Yuh-Jung Youn became the first Korean actress to win best supporting actress.

The mood was celebratory from the beginning, and there was barely any black on the red carpet — even from the men. Leslie Odom, Jr.’s Brioni suit had layers of gold, from shirt to tie to jacket, and with gold jewelry to boot. Colman Domingo’s hot pink Valentino had a lot of flash (some might say of the variety better suited for a show like the Grammys), but atop a fuchsia carpet (instead of the traditional red), it felt simultaneously out-there and elegant. Jewelry, in the form of flashy cocktail rings and complicated lapel pins (the latter on musician Jon Batiste), suggested that men should want to feel a little extra in this moment.

Most of the women on the carpet (which was actually done in a shade of fuchsia instead of the classic hue) chose classic shades of gold, white and red. Prosperity, peace, passion, seemed to be the messages transmitted through their gowns, which each had different dramatic but simple flourishes.

There was the voluminous back bow on Angela Bassett’s chiffon Alberta Ferretti (just the latest look from the actress, who has long been one of Hollywood’s best dressed year after year). There was the dramatic deep-V corset top of Amanda Seyfried’s tulle Giorgio Armani. There was the sunshine-yellow of Zendaya’s Valentino gown, an homage to long-haired red carpet goddess Cher, propped up by Jimmy Choo platforms in the same color that peeked out as wind blew through the actress’s hair. There was the slinkiness of Andra Day’s chainmail Vera Wang, which was barely-there but also worn with the confidence of Elizabeth Taylor as Cleopatra in a similar look in the 1963 film.

While few “normal” people will ever get to dress themselves at the level of fashion that the Oscars has demanded, the even also provides endless inspiration for more everyday moments of glamour. During the late ’90s and early ’00s, lower-priced replicas from designers like ABS By Allen Schwartz let women indulge in their own red carpet fantasies at weddings, proms, galas and the like. There is no doubt that Zendaya’s sunny gown or Carey Mulligan’s two-piece gilded Valentino will provide inspiration for these highly-anticipated moments of dressing up again. Many will take the cue to choose a pair of chunky, gold platform sandals as their new post-pandemic dancing shoes.

Over the past year, many have been suggesting that the new post-pandemic decade will be a “Roaring Twenties” of revelry and maximalism. Now, we have a mood board for it.