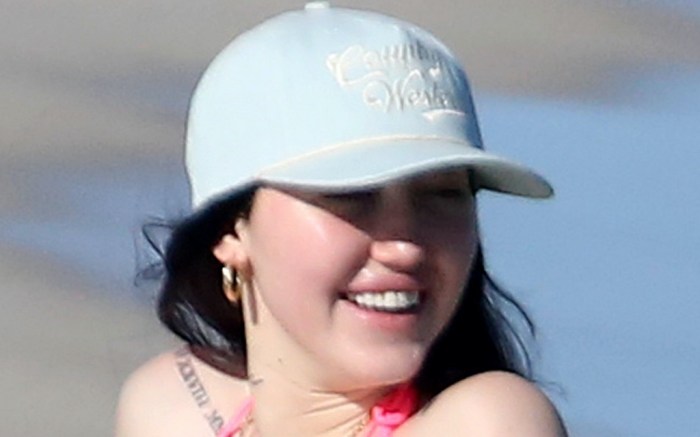 Noah Cyrus brought athleisure to the beach in Miami, Florida—with the help of standout swimwear.

Ahead of her performance tonight with big sister Miley Cyrus on “Miley’s New Year’s Eve Party” on NBC, the “July” singer wore a bright pink bikini while hanging out with friends and her sister Brandi Cyrus. The style included triangular bottoms and a top with cups that featured ruffled edges and string tied for a square-shaped neckline. Cyrus paired the set with rings, hoop earrings and an embroidered trucker cap that read “Country Western.”

When it came to shoes, the “American Horror Story” actress donned slides by Yeezy. The beige pair featured thick toe straps, as well as ridged soles for greater traction. Later paired with a thin black plaid jacket, Cyrus’ footwear proved comfy athleisure styles can be taken from street style to the beach—and back again.

Comfy slides with thick straps, insoles and soles have been trending this year, particularly in lieu of the “work from home” culture that began in 2020. Foam and rubber pairs, due to their softness, have been particularly popular. In addition to Cyrus, styles from Both, Balenciaga and Good American have also been worn by Chrissy Teigen, Vanessa Hudgens and Ashley Benson in recent weeks.

For footwear, Cyrus often wears strappy sandals, combat and thigh-high boots on the red carpet from Stuart Weitzman, Barbara Bui and Public Desire. The star can frequently be spotted in a variety of Nike sneakers on and off the red carpet, as well. However, she’s also unafraid of a major height boost for events, as proven by the towering Marc Jacobs and Ruthie Davis platform heels she’s worn over the years.

Click through the gallery to discover the Yeezy Season 8 collection at Paris Fashion Week.