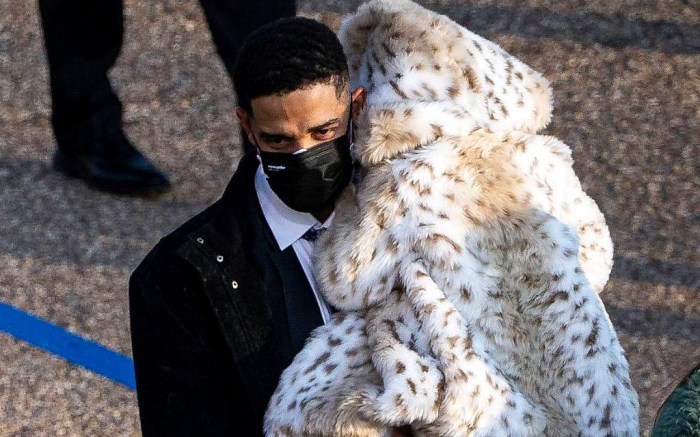 Vice President Kamala Harris and President Joe Biden made headlines today for a series of historical moments surrounding their inauguration today — but it was one unexpected footwear moment that really stole the show and the hearts of constituents everywhere.

Joining the new Vice President and second gentleman Doug Emhoff was a group of close family members including Harris’ niece, Meena Harris and her husband, Nikolas Ajagu, and two daughters. The author and lawyer turned heads herself in a bright green Ulla Johnson dress with a Coach coat and Paris Texas glitter boots; her daughters’ outfits were also a fan-favorite thanks to their matching animal-print fur coats and Evolvetogether face masks.

As if the stylish family needed any more approval for their ensembles, users across Twitter couldn’t get enough of Meena’s husband’s sneakers.

The nephew-in-law of Kamala Harris, who currently serves as a global head of partnerships at Facebook, opted for the buzzy Dior x Air Jordan 1 collab that dropped in 2020.

The Air Jordan 1 Retro High Dior was originally set to drop in April, but the brands postponed the release due to the pandemic. The pairs then released via a special site on June 25. The price tag was $2,000 before they even hit the resale market.

The shoe has a gray and white upper with a Nike swoosh covered in Dior’s logo. Set atop a translucent outsole, the sneakers, decorated with Dior and Jumpman hangtags, debuted during the Dior Homme pre-fall ’20 show in Miami in December 2019. Currently, StockX lists the sneakers anywhere from $7,500 up to $21,744, depending on the size.

After the buzzy sneakers first appeared today behind Sen. Amy Klobuchar on live broadcast, fans immediately took to social media to rave about the footwear choice.

<“A pair of Air Jordan Dior 1s at the #Inauguration? This is black history,” wrote one user. And another account added:Dior Jordans at the inauguration, let’s make that an American tradition.”

A pair of Air Jordan Dior 1s at the #Inauguration? This is black history. pic.twitter.com/nG1iZwXcV1

Dior Jordans at the inauguration, let’s make that an American tradition.

Me, when I saw those Jordan Dior 1's on screen during the Inauguration. @kustoo pic.twitter.com/dCJgLJZuFe

the person wearing Dior Air Jordans at the inauguration deserves at least a cabinet post pic.twitter.com/2jBnrzLLHe

Joe Biden and Kamala Harris’ inauguration made history today for a myriad of reasons. Biden is the oldest person ever sworn in as president while Harris is the first-ever female vice president of the United States. The daughter of Jamaican and Indian immigrants, she is also the first Black person and the first person of South Asian descent to serve in the second-highest office. She joins President Joe Biden in leading a country left on the edge of its seat following the second impeachment of current President Donald Trump by the House of Representatives last week.

Click through the gallery to discover more major moments at the 2021 presidential inauguration ceremonies.