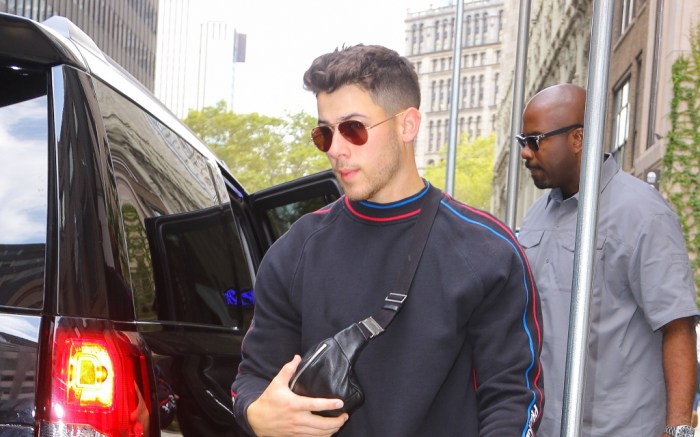 The 28-year-old singer blessed fans during the NBC comedy series by performing his new single “This is Heaven” for the first time. For the performance, Nick dazzled in a salmon-colored suede suit. The look featured a fitted blazer and tailored pants. Nick opted to wear nothing underneath the outerwear piece, giving the ensemble a rocker edge.

On his feet, Nick kept it classic with a pair of black dress shoes. The sleek footwear featured a rounded toe and gave the look a polished finish. Nick’s suit falls right in line with his personal style. The artist has a knack for monochromatic dressing, sporting ensembles that include the same hue on numerous occasions.

Earlier on “SNL,”  Nick performed another new track, titled “Spaceman,” for which he fittingly wore a leather jumpsuit that resembled a spacesuit. In addition to performing, Nick also hosted the show and reassured fans that The Jonas Brothers are still together.

During his opening monologue, Nick’s eldest brother Kevin stood up and asked, “I’m honestly so excited to be here and support you. And also, I’ve got to ask: Are we good? Because I see you’re doing a lot of solo stuff. Are we still a band?”

Nick then responded: “Of course,” to which Kevin said: “Are you sure? Because I just bought a house.” Nick then asserted: “Kevin, the band is still together. I promise.”

The Jonas Brothers, which formed in 2005, consists of Nick, Kevin and Joe Jonas.

Click through the gallery to see more of Nick Jonas’ style.