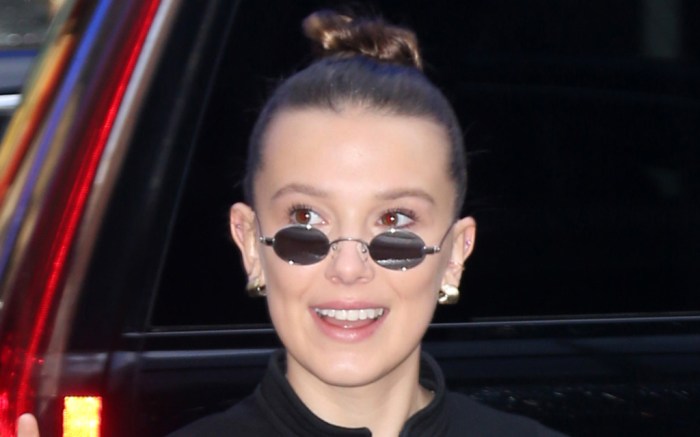 The “Stranger Things” actress posted a series of photos on Instagram on Sunday afternoon, wearing a pair of light blue distressed jeans and a strawberry-print pink sweater vest. The Gen Z star accessorized with a pearl necklace, claw hair clip, and a pair of slim sunglasses — all trendy easy 2000s staples that have been revived by TikTok.

Brown’s sweater vest was especially on-trend. The vintage garment has become synonymous with optimistic and colorful style since brands like Louis Vuitton, Dior and Miu Miu released their own high-end versions this year. The piece has also gained popularity among celebrities, finding fans in stars like Harry Styles, Bella Hadid, and Victoria Beckham. Brown’s version hails from Muineobuka, retailing for $12 on Amazon.com.

On the footwear front, Brown wore chunky white and black rubber sandals over blue socks. The comfy combination fit into the “ugly” sandal trend that’s also gained popularity this year, through styles with thick straps, rubber soles, and cushioned footbeds from Birkenstock, Teva and Crocs. Brown’s casual style often takes inspiration from the early 2000s and ’90s. The Emmy-nominated actress posed in a similar Y2K ensemble earlier this year, wearing a denim miniskirt and long-sleeved polo with a Dior shoulder bag on Instagram.

When it comes to shoes, the “Enola Holmes” star tends to favor footwear that’s both comfortable and stylish. Her favorite sneakers are usually by Converse and Nike, though she’s also known to slip into fluffy slides and slippers by Ugg; Dr. Martens combat boots are also a favorite of the young actress. For more formal occasions, Brown often gravitates towards open-toed heels, platform sandals and slingback pumps from top labels like Roger Vivier, Amina Muaddi and Tabitha Simmons. She’s also known to wear similar styles from more affordable labels like Sam Edelman, as well, appealing to her Gen Z fanbase.

As Brown’s career has grown, so has her presence in the fashion industry. Last summer, she released a customizable range of tie-dye Chuck Taylor All Star 70 sneakers with Converse. This year, she partnered with Thai artist Pauline Wattanodom for a similarly customizable sneaker range called Millie By You. The actress has also been signed to IMG Models since 2016, appearing in campaigns for Calvin Klein, Moncler and Penshoppe. Since 2019, she’s also been a brand ambassador for the jewelry brand Pandora.

Click through the gallery for more of Millie Bobby Brown’s best looks over the years.