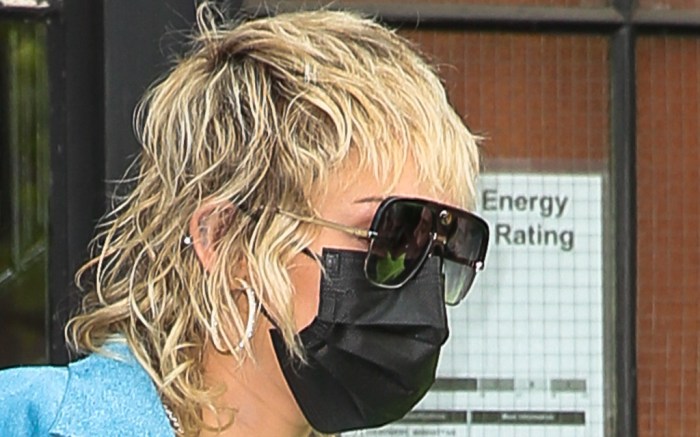 Miley Cyrus’ latest rockstar-worthy is up in the air, literally.

While relaxing onboard a flight, the “Angels Like You” singer wore a red suit with a white crop top and undone green tie. The look epitomized the laidback edgy style she’s worn since releasing her latest album, “Plastic Hearts.” Cyrus accessorized with a pair of groovy oversized tortoiseshell-framed sunglasses, as well as two delicate gold necklaces — one featuring a guitar pick charm — and drop earrings, plus a chic black face mask.

On the shoe front, Cyrus gave her ensemble Western flair with a pair of white cowboy boots. Atop contrasting black soles, the shoes featured pointed toes and thin embroidered patterns. The style was similar to previous studded and embroidered pairs the singer wore in her teenage years while starring on the Disney Channel show “Hannah Montana,” as well as her famed bohemian fashion era in the late 2000’s. They also aren’t the first pair of bold white boots Cyrus has worn recently — she also donned a crystal-covered pair by Gucci to perform at Lollapalooza earlier this weekend.

Western boots have come back into fashion this year, with many celebrities favoring the style since it came back as a trend in 2018. Stylish takes on the classic style often feature pointed and square-shaped toes, as well as a range of finishes and colors, from brands like Isabel Marant, Jeffrey Campbell, and Givenchy. Stars like Sophie Turner, Kendall Jenner, and Kourtney Kardashian have all worn pairs this season as well, cementing its’ following on the A-list.

Cyrus is a style chameleon when it comes to shoes, with most of her pairs coordinating with her current musical era. Since the release of her rock album “Plastic Hearts,” the “7 Things” singer has donned a range of platform sandals, boots, and pumps — often accented with crystals, studs, or metallic tones — by brands like Saint Laurent, Giuseppe Zanotti, and Amina Muaddi. The star has had a long-standing background in fashion since rising to instant fame in the early 2000’s, even collaborating on a line of sneakers with Converse in 2017. Most recently, she’s starred as the face of Gucci’s newest fragrance, Gucci Flora Gorgeous Gardenia.

Click through the gallery to see Miley Cyrus’ glamorous style evolution over the years.