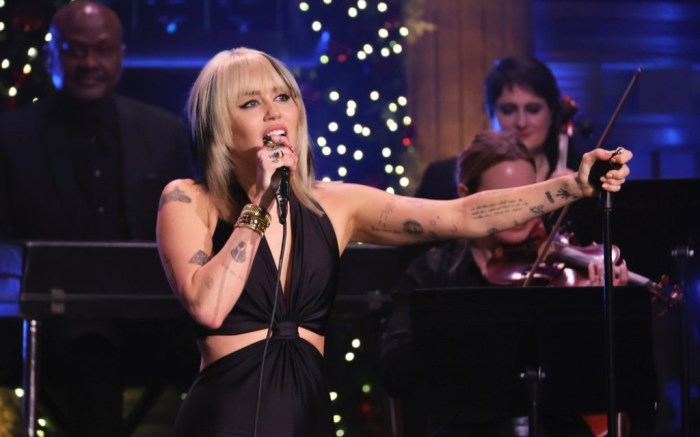 The “Plastic Hearts” singer appeared on the late-night show on Thursday night as both the musical guest and the co-host alongside Pete Davidson. Cyrus played “True Confessions” with Fallon and Davidson and serenaded Davidson with a cover of Yvonne Fair’s “It Should Have Been Me.”

Cyrus wore a black bodysuit while on the show. Her spandex jumpsuit featured a halter neck, a deep v-neck and cutouts in the torso, and the hemline reached her ankles. The Disney Channel alumna also sported a large white coat throughout the episode. She topped off her look with gold rings and bracelets.

For footwear, Cyrus added a pop of color. She wore a pair of pumps that featured both blocks of bright blue material that contrasted to her black outfit, as well as clear, PVC material. The thin stiletto heel was approximately 4 inches in height.

While she is best known for her hit albums and box office films, the “Last Song” actress also dips her toes in the fashion and shoe space. She even made an appearance on the runway at the Marc Jacobs’ fall ’20 show and has also sat front row at shows for top labels such as Tom Ford and Saint Laurent. The “Prisoner” songstress also has worked with Converse on a series of pride-filled shoe collections and is currently partnered with Gucci for several of beauty and apparel campaigns.

Add a pop of color with your own blue heels.

Click to see Miley’s style transformation over the years.