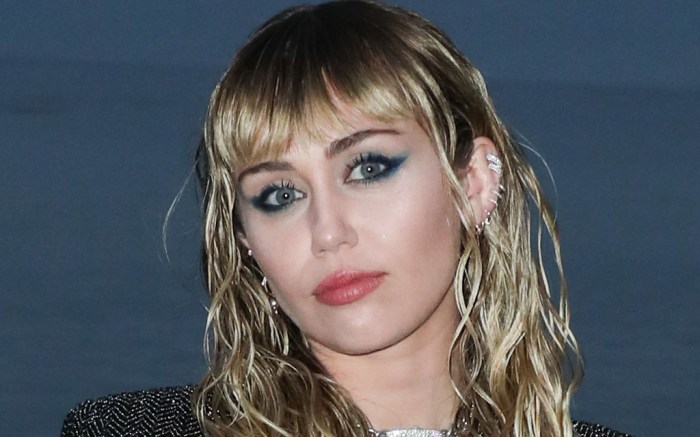 When it comes to Miley Cyrus’ style this summer, only three words come to mind: rock n’ roll.

Whether they veer towards grunge or glam rock, the singer has made the genre, which rose to fame in the ’80s and ’90s, a focus when choosing outfits. The aesthetic change appears to be part of her newest musical era for her newest rock album, “Plastic Hearts.” Cyrus’ looks this summer have consistently highlighted a variety of silhouettes and styles, ranging from printed coats, studded tops and crystal-covered jumpsuits to bold red suiting — and even her own punky merchandise line. Feathers, studs, sequins and plenty of embellishments are always in circulation. Whether it’s high-end brands like Moschino and Roberto Cavalli, independent labels like Thebe Magugu or vintage numbers from designers like Bob Mackie, Cyrus always ensures that she brings glamour and a youthful energy to any outfit. Indeed, it appears that her fashion philosophy this season is simple: more is more.

The “Slide Away” musician has also applied the rock n’ roll makeover to her shoes, which similarly vary in their styles and finishes. When performing, platform boots in a range of metallic and retro white styles have been her go-to pairs. However, when off-duty, both combat and Western boots have also found their place into her wardrobe. Of course, there are plenty of moments that also include metallic sandals, courtesy of Gucci — which Cyrus began an ambassadorship for this year.

Below, view the full range of outfits she has worn this season, from glamorous concert ensembles to casual punk rock-inspired outfits.

For one of her final Lollapalooza sets last month, the singer donned a custom outfit by Gucci. Her red crystal-covered jumpsuit featured long sleeves and a large Gucci logo belt. Paired with custom crystallized white platform boots, the retro outfit went instantly viral — according to Lyst, searches for Gucci playsuits soared by 71% mere hours after her performance.

While starring as the face of Gucci’s newest fragrance, Cyrus stunned in a look that was both romantic and glamorous. The “7 Things I Hate About You” singer posed in a new campaign for Gucci Flora Gorgeous Gardenia, wearing a lacy hot pink top and pants with yellow socks and silver block-heel sandals, all by the Italian luxury brand.

Cyrus advertised her new merchandise line in bold fashion, paying tribute to her country roots while staying true to her punky spirit. The star posed atop dad Billy Ray Cyrus’ truck in a pink cutoff T-shirt, featuring lines like “Miley Cyrus Made Me Gay,” as well as a black leather belt and metallic gold Gucci sandals.

Cyrus stepped out in pure ’80s glamour for a Fourth of July performance at the Ayu Day Club in Resorts World Las Vegas. The singer wore an edgy custom cowl-neck shirt and American flag-print miniskirt by Roberto Cavalli for the occasion, as well as a dazzling pair of David Yurman earrings. The look was complete with black knee-high boots covered in silver sequined stars.

While filming her “Stand By You” Pride concert at the Ryman Auditorium for NBC’s Peacock this June, Cyrus shone in a vintage Bob Mackie dress. The pink feather-covered number featured a studded bodice. Cyrus also donned a variety of sparkly, sequined and feathered outfits for the occasion from brands like Gucci, Giambattista Valli and Jean Paul Gaultier, paired with shoes like Giuseppe Zanotti platform sandals.

While hanging out with fellow musician Orville Peck in June, Cyrus wore an extra edgy look. The singer donned a striped “boyfriend”-style dress shirt, layered under a red and black bustier, by Moschino. Her outfit was complete with black flared trousers, as well as a pair of black patent platform combat boots.

Cyrus kicked off the summer with an online 8D concert, created in partnership ice cream brand Magnum. To promote the shoe, the star stunned in a black-and-white diamond-print coat from Valentino, worn with a white dress shirt, pleated shorts and sheer tights. Her look was complete with a bold pair of towering black platform shoes, which featured 6-inch heels and metallic ankle straps.

Click through the gallery for more of Miley Cyrus’ bold style transformation over the years.