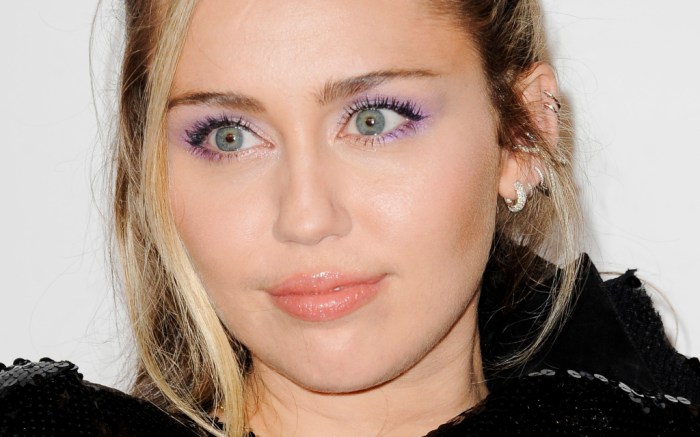 Miley Cyrus was a lady in red for her appearance on “Saturday Night Live.”

The songstress performed on last night’s episode of the comedy sketch series, which was hosted by Tesla Motors CEO Elon Musk. Cyrus shared a few Instagram posts of herself alongside Musk from the businessman’s opening monologue, wearing a bold red feather top.

The fuzzy look was sleeveless and cascaded down past her waist. Cyrus then went monochrome by teaming the top with a pair of red straight-leg trousers. The combination of the top and pants created an old Hollywood-like aesthetic. From the 1930s to ’60s, Hollywood event style was all about tailored looks and fur. Stars were often seen in vibrant and shimmery hues on the likes of wrap dresses, mermaid gowns and constructed jumpsuits. Nearly every look at the time was topped off with a statement fur coat.

However, in true Cyrus fashion. The pop star gave her look a grunge twist with dark eye makeup and her mullet haircut.

Following the opening scene, Cyrus performed Dolly Parton’s “Light of a Clear Blue Morning” as a sweet Mother’s Day tribute to her godmother. Cyrus’ own mother, Tish, was present for the performance. For the rendition, Cyrus styled a white shirt dress, which featured an embroidered detail at the chest, underneath a black corset belt.

Later in the episode, Cyrus performed her new song “Without You,” featuring Kid LAORI for the first time. The duo released the song last night.

Cyrus’ “SNL” looks fall right in line with her signature edgy style. When it comes to her wardrobe, Cyrus doesn’t shy away from bold pieces such as platform heels, fishnet tights, cut out t-shirts and leather looks. She’s also a big fan of plaid patterns and nearly anything metallic. As for brands, Cyrus’ rotation includes: Versace, Saint Laurent, Gucci and Alexandre Vauthier.

Click through the gallery to see Miley Cyrus’ style transformation.