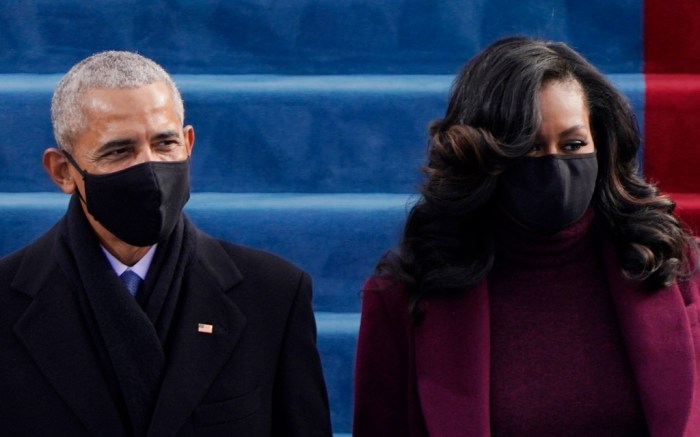 The former commander in chief showed his support for his former Vice President at today’s monumental event, joined by his wife and former first lady Michelle who wore a standout monochromatic look for the occasion. Her streamlined ensemble from Black designer Sergio Hudson layered a fuschia top with coordinating wide-leg trousers and a cut-hem coat; Vice President-elect Kamala Harris is also reportedly wearing the Black-owned label today.

As for footwear, Michelle tapped Stuart Weitzman for its signature Vernell stretch suede boots; similar designs retail for $595 on the American designer’s website.

Michelle’s own legacy as the first lady and beyond includes numerous campaigns like Let’s Move!, encouraging children to embrace a healthier lifestyle, and the Let Girls Learn initiative, which is dedicated to increasing access to education for girls. Beyond her endless charitable actions and positive influences, the “Becoming” star also turned into a style icon across her eight years in the capital. Her personal style mixes together everything from affordable J.Crew shoes and accessories to standout glimmering Balenciaga boots from her 2018 interview with Sarah Jessica Parker.

As her for inauguration day, you can’t forget about her memorable looks from both of Barack Obama’s inaugurations in 2009 and again in 2013. For her husband’s first swearing-in, Michelle layered an Isabel Toledo dress and coat with a Nina Ricci cardigan, and J.Crew leather gloves, topped off with Jimmy Choo heels. In 2013 for President Obama’s second term, the then-first lady stunned in a Thome Brown jacket dress with Reed Krakoff leather suede boots.