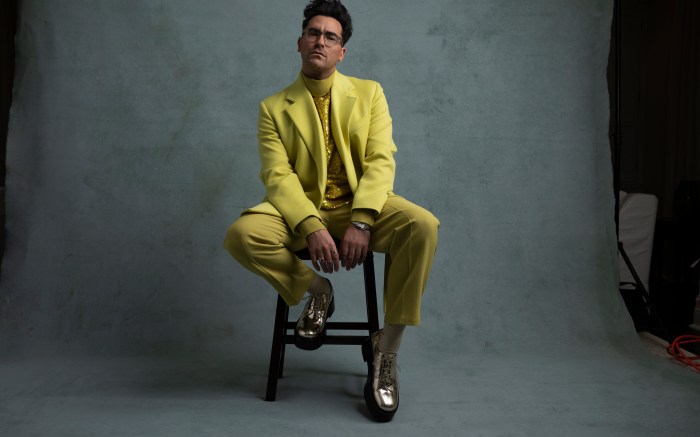 Celebrities served up countless incredible fashion moments at the Golden Globes 2021 on Sunday, even the ones that attended from home. This year, the prominent menswear trends involved stepping away from traditional black-and-white tuxedos and leather lace-ups with avant-garde suits and platform shoes, allowing television and film’s biggest names to experiment with color, texture and structure.

Topping the list was Dan Levy, who had a monochromic moment in a yellow-green suit from Valentino. For added flair, the “Schitt’s Creek” star layered the look with a sequined turtleneck sweater and metallic platform oxfords.

Another star that proved monochrome and award shows go hand-in-hand was Tahir Rahim, who tuned into the show from Paris dressed in a sleek, double-breasted navy suit from Louis Vuitton. Adding an element of sophistication with a black mock neck top underneath, “The Mauritanian” star opted for black leather boots instead of traditional dress shoes.

Rounding up the stylish men of the Golden Globes was Josh O’Connor, who channeled his royal counterpart Prince Charles with a dapper monochrome suit from Loewe. Successfully combining runway with retro, “The Crown” star’s ensemble featured vintage-inspired detailing, starting with the black suit jacket’s white lapel. Paired with white pants, he styled the contrasting suit with a creped high-neck dress shirt, which had a high-fashion scarf-like silhouette, and croc-embossed black loafers.