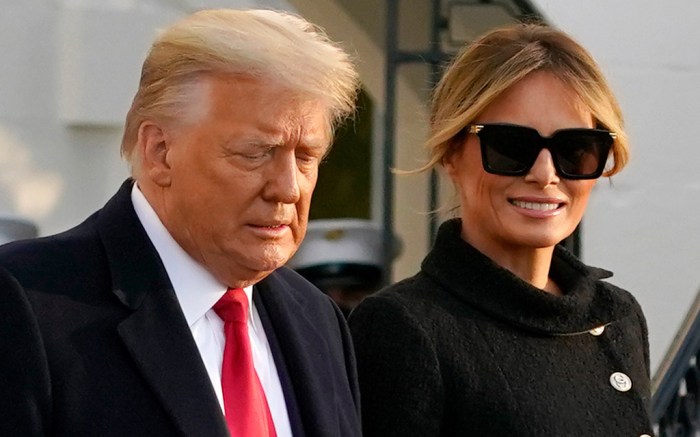 Melania Trump and President Donald Trump have officially left the White House for the final time as acting president and first lady of the United States.

The first couple boarded Air Force One this morning to head to President Trump’s Mar-a-Lago estate in Florida where they will reside for the time being. Meeting with members of the press, the couple said their goodbyes on the South lawn in coordinating attire. Melania herself opted for an all-black look, teaming a black Chanel jacket with gold buttons and a Dolce & Gabbana dress to an embossed Hermès Birkin tote.

On her feet, the first lady continued her appreciation for Christian Louboutin heels in a textured pair from the French label. Opting for the brand’s So Kate silhouette, the heels feature an embossed patent leather upper atop a pointed-toe design and a low-dipping vamp.

Finished off with a signature red sole and a towering 5-inch stiletto heel, similar takes on the style retail for $795 online at Net-a-Porter.

The former model released her official farewell speech on Sunday ahead of the upcoming inauguration of President-elect Joe Biden tomorrow, Jan. 20.

Standing at the podium in the White House, Melania took to social media in a textured double-breasted black and white coat dress to address the public for what may be her final time as the first lady.

“My fellow Americans, it has been the greatest honor of my life to serve as first lady of the United States,” started Melania in her 7-minute long speech. The speech touched on everything from the impact of the pandemic to law enforcement and military service to her Be Best campaign, the leading policy initiatives of her term as the first lady that focuses on a series of major issues facing children in modern times.