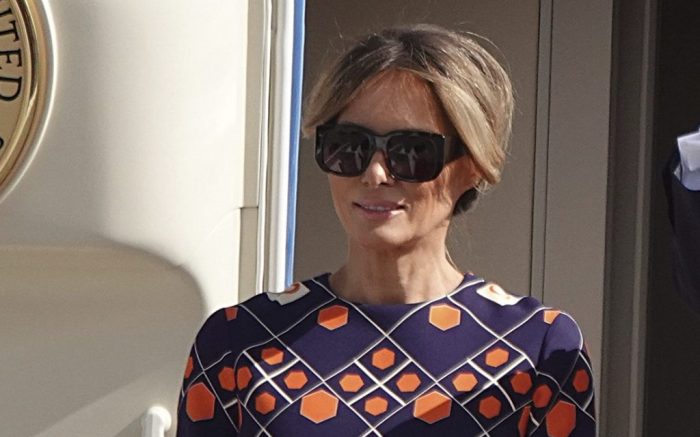 The Trumps have arrived in Florida after leaving the White House for the last time on Inauguration Day 2021.

The look, which takes inspiration from the 1960s and 1970s, features an orange and navy colorway with a hexagonal pattern. The dress is complete with a silk construction and offers a minimalist column silhouette with a round neck and fluted sleeves. The frock is available for $3,700 at Matchesfashion.com.

On her feet, Melania opted for more comfortable footwear, sporting a pair of navy flats from Roger Vivier. Called the Gommettine Ball Leather Point-Toe Flats, the shoes are designed with the brand’s signature buckle with a pointed toe. The look comes with a $625 price tag at SaksFifthAvenue.com.

Melania’s arrival ensemble was undoubtedly much more lively than the more demure look she sported to say her goodbyes on the South Lawn back in Washington.

Prior to the presidential inauguration, Melania issued a farewell speech on Sunday. The former model expressed that “it has been the greatest honor of my life to serve as the first lady of the United States.” She also touched on the ongoing coronavirus pandemic and her Be Best campaign.

Also ahead of the ceremony, former President Trump announced that he and Melania will not be in attendance at today’s inauguration of Joe Biden, making him the first president in modern times to skip his successor’s swearing-in.

President Joe Biden and Vice President Kamala Harris‘ inauguration made history today for a myriad of reasons. Biden is the oldest person ever sworn in as president while Harris is the first-ever female vice president of the United States. The daughter of Jamaican and Indian immigrants, she is also the first Black person and first person of South Asian descent to serve in the second-highest office. She joins President Joe Biden in leading a country left on the edge of its seat following the second impeachment of current President Donald Trump by the House of Representatives last week.

Click through the gallery to see more of Melania Trump’s shoe style.