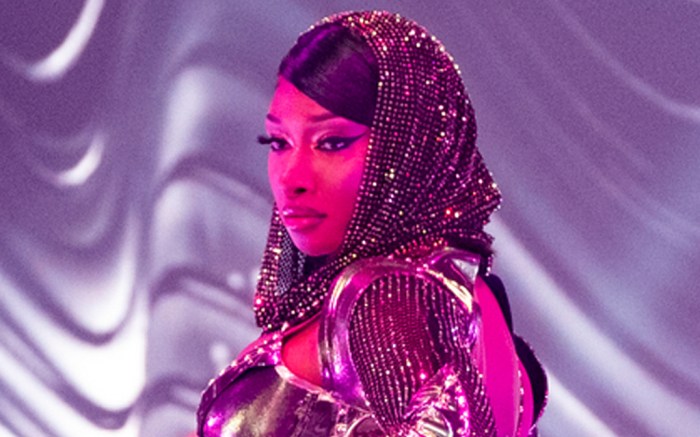 The “WAP” musician brought her signature flash and flair to the stage with a performance of her hit song “Savage,” complete with a voguing routine. The outfit featured a glittering mesh bodysuit, complete with metallic panels and a studded corset. Full coverage also came in the form of matching gloves and a hood for added shine.

To finish the ensemble, the “Body” musician wore a pair of sparkling sequined boots. The stiletto boots featured a pointed toe, covered in the same type of mesh as her bodysuit. They also featured matching metallic panels on their interior sides, creating a full-body look.

Last week, Megan Thee Stallion wore another major “Legendary” look. The rapper, who’s one of the television series’ judges, commanded the stage in a modern-day version of Marie Antoinette’s 18th-century glamour. Her ensemble, consisting of a glitter-trimmed pink corset with matching bottoms and a matching garter belt, was accessorized with a powdered pink wig and a set of white fishnet tights tucked into high-shine gold pumps.

HBO Max’s “Legendary” premiered on the platform in May 2020; the series is a voguing competition inspired by the underground ballroom community. With members from different “houses” competing for a $100,000 prize, Megan The Stallion serves as a judge for the battles along with actress Jameela Jamil, celebrity stylist Law Roach and dancer Leiomy Maldonado, also known as the “Wonder Woman of Vogue.”

Since her music began topping charts worldwide, Megan Thee Stallion has also racked up a series of high-profile collaborations in the fashion industry. The rapper previously starred in Puma’s campaign to promote its Cali Sport sneaker back in November 2019, and also collaborated with Fashion Nova on a namesake collection last spring; the 5-foot-10 star’s capsule line offers jeans for taller silhouettes. Additionally, she stunned in Rihanna’s Savage x Fenty lingerie brand’s summer ’20 campaign, as well as Coach’s spring ’21 presentation.

Click through the gallery to find more of Megan Thee Stallion’s boldest looks over the years.