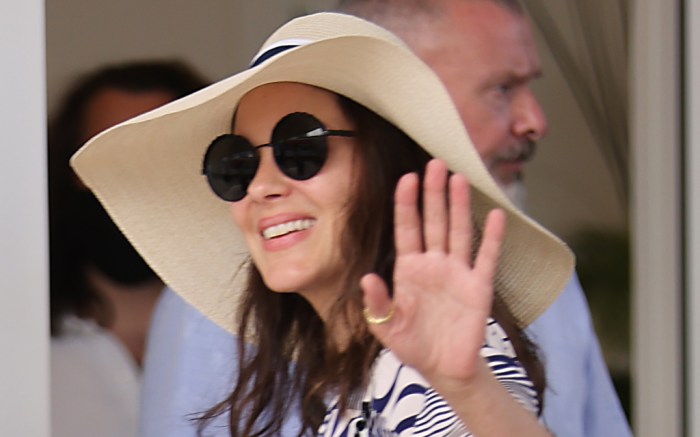 Marion Cotillard is continuing to make the 2021 Cannes Film Festival her personal runway. This afternoon, the “Annette” actress donned a sleek ensemble that’s utterly perfect for a beach trip on the French coastline.

Cotillard was spotted outside of the Hotel Martinez in a flowing dress from Stella McCartney’s fall 2021 collection. The short-sleeved Magnolia dress featured swirling pale pink and navy stripes, printed on sustainable viscose in a wavy pattern. The piece also boasted sharp navy trim on its front, encircling an angular cutout. Cotillard accessorized with a small chic white quilted crossbody bag with black metal hardware by Chanel, complementing the light and dark tones of her outfit. She also paired the look with circular black sunglasses and a floppy woven hat.


For footwear, Cotillard donned a set of metallic silver sandals. The pair featured multiple metallic silver straps, as well as a slightly raised wooden wedge heel. Their metallic tone added an elegant contrast to Cotillard’s free-spirited dress, while complementing the outfit’s similarly cooler tones. Strappy sandals have become a must-have shoe this summer, appearing in flat and heeled styles on stars like Heidi Klum, Bella Hadid, and Lizzo — to name just a few.

Since arriving in Cannes, Cotillard has continued her record for sharp dressing. Over the last several days, the “Inception” actress has been seen in outfits including blue floral and silver sequined dresses and a sleek black-and-white neck-tie blouse and biker shorts, all by Chanel. The French brand is a favorite of Cotillard’s, especially as she’s one of its’ longtime ambassadors. Most recently, Cotillard put a fashionable twist on overalls in a striped outfit from Chanel’s 2021/2022 Cruise collection.

Cotillard has a dazzling background in the fashion industry, as a fixture in front rows and campaigns for top fashion labels. The “La Vie en Rose” star has previously been a face of Chanel’s iconic No. 5 fragrance, as well as appeared in campaigns for Dior; she was also the 2008 face of the label’s Lady Dior handbag. During Paris Fashion Week, she’s often seen in front rows for major brands like Jean Paul Gaultier and Giorgio Armani, as well as Dior and Chanel.

The actress is known for her sleek and adventurous sense of style, often wearing colorful color-blocked and oversized ensembles in addition to chic dresses and dazzling gowns by Giambattista Valli, Louis Vuitton, and Ulyana Sergeenko. Cotillard’s outfits are often accompanied by a similarly sharp footwear collection, including pointed-toe ankle boots, combat boots, strappy sandals, and pointed-toe pumps by Giuseppe Zanotti, Aquazzura, and Nicholas Kirkwood—as well as plenty of shoes by Chanel and Dior.

Make a sleek statement in your summer looks with silver sandals, inspired by Marion Cotillard.

Click through the gallery for more of the best celebrity outfits from the 2021 Cannes Film Festival.