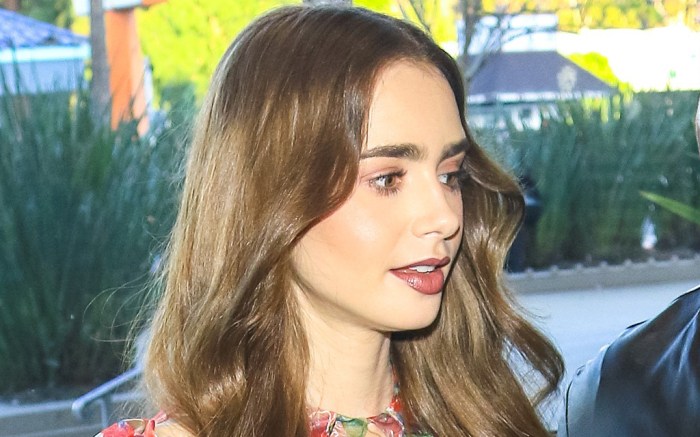 Basking in the glory of her new nomination, Lily Collins enjoyed a day of busy press in a bold look this week.

The actress, whose Netflix series “Emily in Paris” is now up for a Golden Globe, participated in an event for the SAG Awards in a layered Miu Miu ensemble. Starting off with laser-cut tights, the British-American star added in a sheet glittering dress with a sweater-style top.

The boldness of the look extended into her shoes, slipping on a set of towering black boots; the round-toe style came set atop a lifted platform as well as a teetering heel that measured around 6 inches in height.

At the end of January, Collins showed off another side of her style as she modeled a Yves Saint Laurent look complete with a liquid leather midi skirt. She also tapped into a growing footwear trend for spring: loafers. Stars like Hailey Baldwin, Rebel Wilson and Katie Holmes have rocked the silhouette in the past few weeks alone.

When she isn’t in dressier designer duds, Lily Collins’ off-duty footwear style includes a mix of labels such as sustainable brand Rothy’s and workout-ready pairs from Brooks Running. The “Mank” star also serves as an ambassador for Lancôme and has previously starred in ad campaigns for Barrie on top of appearing front row for the biggest names in fashion during Fashion Month — think Chanel, Givenchy,  and Valentino amongst other major designers.

Elevate your style like Lily Collins in these teetering boots.

Click through the gallery to discover more of Lily Collin’s best and boldest looks over the years.