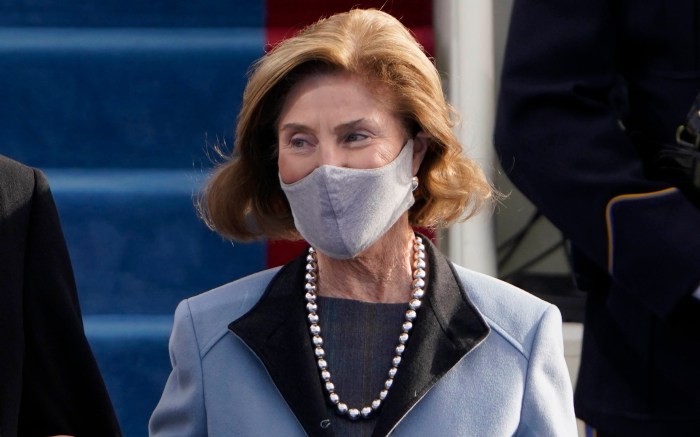 While arriving at the 46th Presidential Inauguration today in Washington, D.C., Laura Bush embodied hues of change with a stand-out robin egg blue coat with her husband and the 43rd United States President, George W. Bush.

The former first lady wore a dark gray dress with a knee-length and a classic cut. Over the top, Laura added a colorful element to her otherwise neutral ensemble and layered a single-breasted pale blue coat with black lapels over the top. She styled it with a pearl necklace, sheer black tights and a gray face mask in a matching shade to her dress. For footwear, the Texas native completed the ensemble with a pair of black loafers, which had bow accents along the toe.

With this outfit, Bush shared another timeless ensemble, her robin blue outerwear choice symbolized the overarching theme of unity that President Biden strives to make as the mission of his presidency. This sartorial statement further underscores the influence of first lady style and its prevailing significance in American fashion.

As for her footwear, Laura continues to be an avid wearer of black shoes. At former President Bush’s Inauguration ceremony in 2001, the first lady paired her swearing-in ensemble with a pair of classic black pumps. This elegant choice bid an ode to Jacqueline Kennedy’s and Mamie Eisenhower’s footwear selections, who both wore similar pairs of shoes for their husband’s ceremonies in 1961 and 1953, respectively.

Click through this gallery to see all the moments from Inauguration Day 2021.