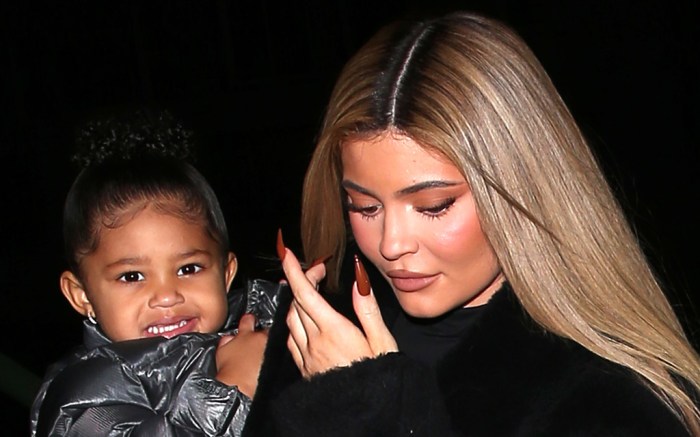 The Kylie Cosmetics founder joined Scott in throwing their toddler another birthday extravaganza, complete with a Stormi-inspired blow-up slide and themed decor across the house. For the event, Kylie tapped into a selection of growing trends including one outerwear style in particular: the puffer jacket. Puffers quickly became the must-have outerwear thus far in the new year, seen on the likes of Kendall Jenner, Jennifer Lopez, Heidi Klum and more major stars in the past few weeks alone.

Kylie’s own twist on the trend came in the form of a neon orange oversize design, layered over slouchy black pants and buzzy sneakers.

The media personality’s black and white Nike sneakers come with a deeper meaning courtesy of Yoon Ahn’s collaboration between her Ambush label, the Swoosh brand and the NBA. Ahn became the first female designer to partner with Nike and the NBA in December 2020, releasing a collection inspired by Los Angeles Lakers and Brooklyn Nets merchandise from the 1990s.

In the capsule, a new footwear iteration rose to prominence with the collaborative Ambush x NBA x Nike Dunk High; the silhouette transforms the basketball-style design with an elongated cut and exaggerated detailing with the Swoosh and overlays as an homage to Japanese bike, car and truck culture.

“I thought, ‘How can I make the shoes almost look like this moving thing?’” Ahn said in a statement.

When it comes to footwear and shoes, Kylie Jenner herself has an impressive history specifically in the sneaker industry. Before she was a beauty mogul, the beauty mogul has held multiple gigs in the sneaker world. She formerly served as a brand ambassador for Puma before joining forces with Adidas in August 2018, exclusively wearing Three Stripes styles in campaigns and across social media.

Click through the gallery to look back at Kylie Jenner’s wild style evolution over the years.