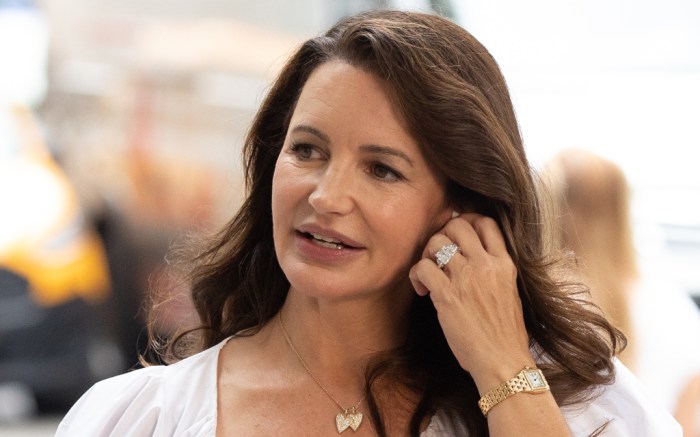 Charlotte York is back.

On Monday, Kristin Davis was spotted filming the “Sex and the City” revival in New York city, wearing what is definitely her most Charlotte look to date. As fans know, Davis portrays Charlotte — a  respected art dealer turned housewife. The chipper friend of Sarah Jessica Parker’s Carrie Bradshaw is best known for her all-American, “Park-Avenue princess” style, which consists of classic silhouettes such as: perfectly tailored sets, preppy dresses and pleated skirts — all wrapped in feminine hues and girly patterns.

Sticking to the nostalgic theme, Davis was photographed wearing a trendy white puff-sleeve top paired with a blue and white polka dot skirt that was finalized with a pleated design. The pieces were pulled together with a yellow belt and a coordinating top handle bag that featured a whimsical bird design.

As for footwear, Davis was styled in another signature wardrobe item Charlotte is known for: classic pumps. Today’s pair were yellow in hue and featured a pointed toe and sat atop a stiletto heel.

Charlotte isn’t the only friend of the group to have a thing for pleated skirts. Last week, Davis’ costars Parker and Cynthia Nixon (Miranda Hobbes) were seen getting into character while filming. Parker’s character — known for taking fashion risks — was seen in a classic white tee tucked into a houndstooth pleated skirt with a cardigan and wide-brim hat to tout.

On her feet, Parker opted for with towering platform heels; the round-toe design came set atop a 2-inch base with a sturdy block heel and a strappy finish.

As for Nixon’s Miranda — the no-nonsense attorney and mother of one — was dressed in a a button-up shirt and wide-leg trousers. She finalized her ensemble with nude pointed toe pumps.

In January, it was announced that a “Sex and the City” revival would be heading to HBO Max. The new series, titled “And Just Like That” will star Parker, Davis and Nixon. Kim Cattrall, who played Samantha Jones, will not be returning. The reboot will feature 10 episodes.

A release date has not yet been announced, but the cast did a read through in June and began filming shortly after.

“Sex and the City,” which was created by Darren Star — the man also behind “Younger” and “Emily in Paris” —  first premiered on HBO in 1998 and ran for six seasons before ending in 2004. In 2008, “Sex and the City” the movie was released, which saw Carrie finally marry Mr. Big (Chris Noth). Two years later a sequel followed.

Add yellow pumps like Charlotte’s to your footwear rotation with these picks below.

Click through the gallery to see the best shoe styles from “Sex and the City.”