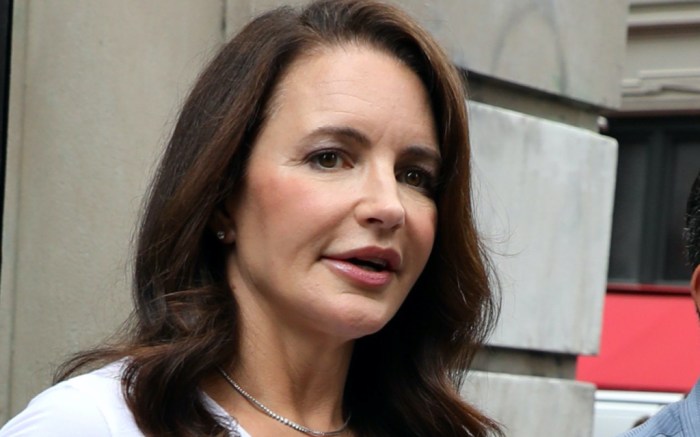 Kristin Davis made the case for “summer whites” while filming “And Just Like That…” in New York City’s Soho district yesterday.

Davis was spotted filming the “Sex and the City” reboot at a Manhattan Starbucks, wearing an outfit that purely channeled her optimistic character Charlotte York. The actress donned an elegant Emilia Wickstead midi dress, featuring a navy boat print. The garment also boasted a pleated skirt and sweetheart neckline — both signatures of York’s feminine “Park Avenue princess” style. The dress was layered with a white T-shirt and cinched with a cobalt blue belt. Davis completed the look with a white Fendi basket bag, crafted from recycled plastic and accessorized with the Italian brand’s pink crochet coin pouch. Her handbag retails for $650 on Fendi.com.


For footwear, the “Deadly Illusions” actress was styled in matching shoes — another Charlotte signature. Davis wore a white pair Alexandre Birman’s Clarita sandals, featuring two knotted leather straps. The shoes also boasted 3.5-inch block heels and square toes, one of the season’s most popular trends. The silhouette is reminiscent of sandals and pumps from the late ’90s and early 2000’s — including shoes that Davis wore herself on the original “Sex and the City” show. Davis’ sandals retail for $525 on SaksFifthAvenue.com.


Davis’ latest look has continued a streak of costumes for “And Just Like That…” that have updated Charlotte’s feminine wardrobe for the 2020’s. She’s previously been spotted in ruffled, off-the-shoulder, and puff-sleeved blouses and midi skirts by brands like Stella McCartney, Alexander McQueen, and Carolina Herrera. Recently, Davis was seen in a pleated Balenciaga midi skirt, paired with yellow Manolo Blahnik pumps, while in-character as Charlotte.

On the footwear front, it appears that Davis will keep wearing Charlotte’s signature color-coordinated pumps for “And Just Like That…” Previous photos from filming this summer have revealed the character will also don matching heels by Dior, Gianvito Rossi, and Stuart Weitzman in the reboot, among other top labels. Davis herself is known for favoring pointed-toe and peep-toe pumps for the red carpet, typically by Christian Louboutin. When off-set, the star often wears comfy rubber slides by Nike and Oofos, as well as Ugg boots and Golden Goose sneakers.

Click through the gallery to see the best shoe styles from “Sex and the City.”