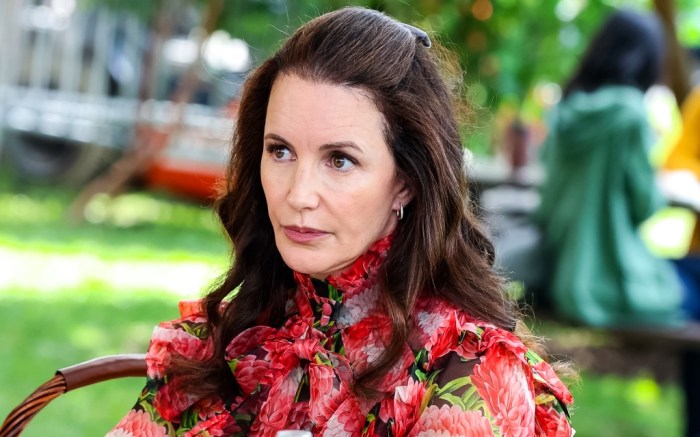 Kristin Davis tried on a few pumps for size behind the scenes, while filming “And Just Like That…” in New York City.

While doing a costume fitting with designer Molly Rogers, the actress was snapped on the show’s costume design Instagram page in a one-shouldered dress. The light blue piece featured a green and white paisley print, as well as a pleated skirt and light green belt. The color-coordinated ensemble was signature of the preppy, princess-worthy style of Davis’ “Sex and the City” character, Charlotte York-Goldenblatt.

For footwear, the “Deadly Illusions” star was shown trying on several pump options — which all smoothly coordinated with her dress’ color scheme, and were signature of her character’s wardrobe. Simultaneously, she wore a dark blue pump and a pale green pump. Each featured pointed-toe silhouettes, as well as what appeared to be suede uppers and stiletto heels that totaled at least 3 inches in height. Off to the side, a third pale blue pair — one on Davis’ podium, one on the floor — by Christian Louboutin were also present, which featured a similar style and heel height.

Whichever pair Davis and Rogers choose remains to be seen — but there’s no doubt that pointed-toe pumps are back in our shoe rotations, now that in-person events have resumed. The style’s triangular toes and stiletto heels are instantly classic, while adding elevated sharpness to any look. While filming “And Just Like That,” Davis herself has worn numerous pairs as York, hailing from top brands like Gianvito Rossi, Manolo Blahnik and Chanel. In recent weeks, stars like Rita Ora, Kate Middleton and even Davis’ co-star Sarah Jessica Parker have also been seen in pairs by Louboutin, Emmy London and Saint Laurent.

When it comes to shoes, Davis keeps her other off-duty styles casual. Aside from comfy slides by Nike, she can also be seen in Ugg boots and Golden Goose sneakers. For red carpets, Davis tends to favor pointed-toe and peep-toe pumps from brands like Christian Louboutin. As Charlotte York, photos have surfaced of her this summer in an array of stylish heels by Dior, Stuart Weitzman and Gianvito Rossi, among others.