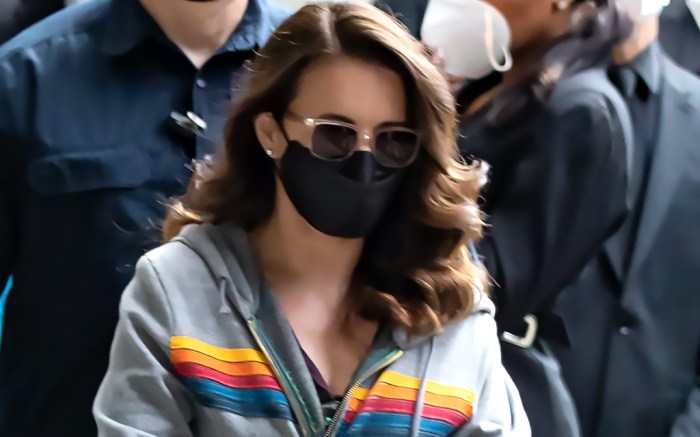 While heading to the set of HBO Max’s much-anticipated “Sex and the City” reboot series in Chelsea, New York City, the actress donned a pair of gray jeans with a gray zip-up sweatshirt. The sweatshirt, embroidered with multicolored stripes, complemented her maroon V-neck T-shirt. Though the look was decidedly an off-duty casual ensemble, the color palette made it streamlined and sharp. Davis accessorized with chic sunglasses with pink acetate frames, as well as a black face mask.

When it came to footwear, Davis kept things similarly casual in a pair of black Nike slides. The shoes featured a diamond pattern on their puffed slide straps, as well as a white branded logo. The style, known for its rubber soles and foam midsoles, proved ideal for walking the city streets without sacrificing function or comfort.


This isn’t the first time Davis has been spotted in slides this summer. During a recent day of filming “And Just Like That…,” the actress was also spotted in a pair of black Oofos slides. Though the shoes are the polar opposite of anything her onscreen character Charlotte York would wear, Davis is proving that casual comfort is key for everyday footwear — especially when the cameras aren’t rolling.

When it comes to shoes, the “Deadly Illusions” star keeps her other off-duty styles similarly casual. In addition to comfy slides, the actress can also be spotted in Ugg boots and Golden Goose sneakers. For red carpets, she tends to favor pointed-toe and peep-toe pumps from brands like Christian Louboutin. As Charlotte York, photos have surfaced of Davis this summer in an array of stylish heels by Dior, Stuart Weitzman and Gianvito Rossi, among others — and we can’t wait to see what she’ll wear onscreen next.

Add some sporty comfort to your next look with black slides, inspired by Kristin Davis.

Click through the gallery for more of the best shoe moments from “Sex and the City.”